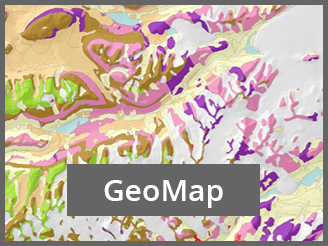 The SCAR GeoMAP (Geological Mapping Update of Antarctica) action group was an international effort to gather both rock and surficial deposit information and compile it into a modern GIS framework. It depicted ‘known geology’ of rock exposures, rather than ‘interpreted’ sub-ice features, and aimed towards continent-wide perspectives and cross-discipline interrogation.  The group ended in 2020, having met its aim with the release of the geological dataset.

The group was led by Simon Cox and Paul Morin, with help from a number of other people (view the pdf list of members, collaborators and supporters (136 KB) ).

GeoMAP material is licensed under a Creative Commons Attribution 4.0 International License. Where the data are used in a figure GeoMAP requests attribution in the following manner: © SCAR GeoMAP and GNS Science 2019. Where reference to the data is to be included in a Reference List and the data is from a single published map, reference to that original source is suggested. If the data come from multiple sheets or the source cannot be identified then the following citation for GeoMAP.v.201907 is suggested:

A GeoMAP web-based explorer can be accessed directly through Antarctic Explorer. 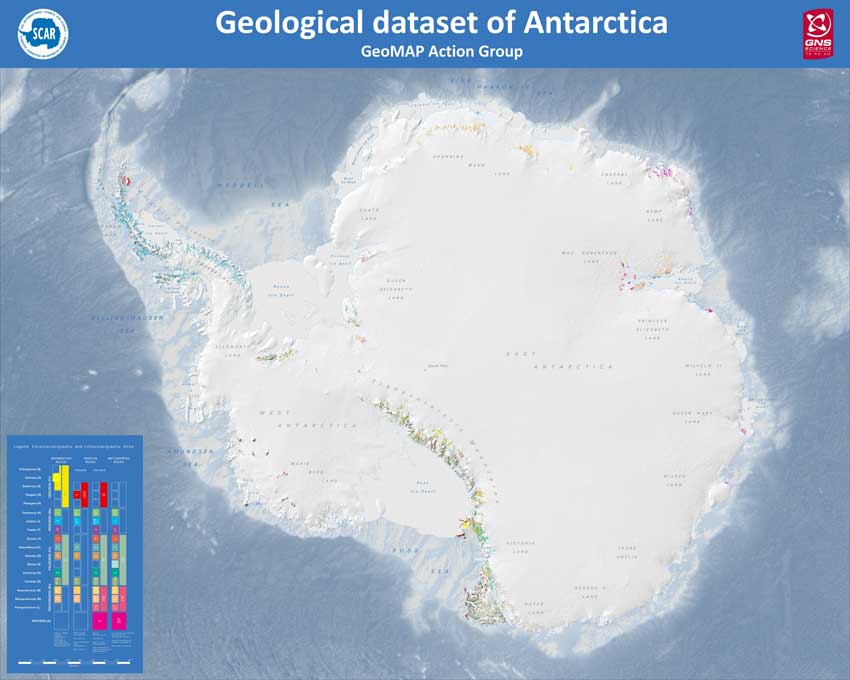 A History of GeoMAP

There are numerous, hard-copy, regional-scale geological maps of Antarctica that were developed last century. Many have been scanned, some have been geo-referenced, but few are more than raster digital information. For the most part they are geologically reliable for defining bedrock geology (‘deep time’) but unfortunately they contain little representation of glacial geology.   The maps have poor spatial reliability in the context of modern science (located by GPS and other satellite sensors), and the maps have not kept pace with the present importance of Antarctica’s role in climate change.

Following publication of the New Zealand Geological Map and the South Victoria Land mapsheet in 2012, GNS Science launched an ambitious project to build a similar high-quality digital geological dataset covering the entire Antarctic continent. Enthusiasm and support was sought at the 2014 Open Science Conference in Auckland through formation of a SCAR Action Group.

Construction involved a ‘top-down’ work-stream, starting from a continent-scale, low density, attribute-poor dataset that has been added to and improved through multiple iterations. It involved capturing existing geological map data, refining its spatial reliability, then improving representation of glacial sequences and geomorphology. Feature classification and description rock and moraine polygons employs international GeoSciML data protocols to provide attribute-rich and queriable data; including bibliographic links to source maps and literature.

Around 95,000 polygons are now unified for use at 1:250000 scale, but locally have areas with higher spatial precision, founded on a mixed chronostratigraphic- and lithostratigraphic-based classification. There has been a specific focus on representation of glacial deposits because of their potential to contain records of ice fluctuations of relevance to climate change.

The project has involved principal collaborators from USA, Norway, Italy, UK, Australia, Russia and New Zealand, but includes contributions from at least 14 nations. Much of the manual work has been completed by an ‘engine room’ of 11 student volunteers, who visited New Zealand on SCAR or Witter-supported internships, or worked remotely by video-conferencing in return for supervision and GIS-training. Many others have provided advice, data and support.  Visit the GeoMAP members page for more information.

Quality and Expected Use

As the dataset has been worked on, it has improved in both its geological interpretation and spatial accuracy. One of the hardest tasks has been, and still is, building consistency and capturing the local nuances of different interpretations available. There will undoubtedly be debate as to how well this has been achieved for v.201907, but there is full-expectation that it will continue to evolve and improve over time. As well as geological units, faults, and bibliographic sources there is a quality layer providing information on the attention various areas have received and the relative quality of the information provided (Scale Lowest=1 to Highest=5).

In many ways GeoMAP is like a spatial Wikipedia of Antarctic geology. It is unlikely to be a first port of call for specialists undertaking detailed research, but all the information is present to provide introductory overviews and bibliographic links to original work. There is potential to provide fresh perspectives, for example, through combined geological legends and interrogation of continent-wide time-space plots. GeoMAP should be ideal for continent-wide perspectives and cross-discipline science.

This group aimed to facilitate an integrated programme to promote the capture of existing geological map data, update its spatial reliability, improve representation of glacial sequences and geomorphology, and enable data delivery via web-feature services.

pdf "Towards a digital dataset of the Antarctic geosphere" (7.11 MB) - a Powerpoint presentation on the SCAR GeoMAP project, its work and the progress made up to 2016 in mapping the geosphere.

GeoMAP held a workshop at the XII ISAES Meeting in July 2015 called "Towards improved geological maps of Antarctic rocks and surficial deposits":