As with so many other events this year, the annual CCAMLR meetings had to adapt to a new way of working due to the restrictions resulting from the Covid-19 pandemic. The 39th meetings of the CCAMLR Scientific Committee and Commission (26-31 October 2020), were held remotely, with Members and Observers participating in online discussions.

SCAR has been active in providing scientific advice and information to CCAMLR since the Convention was established, and continues to make important contributions across a range of topics. This year, SCAR was represented by Dr Susie Grant, Dr Mary-Anne Lea and Dr Cassandra Brooks.

In its annual report to CCAMLR, SCAR presented an update on activities relevant to the work of the Scientific Committee, including by the SCAR Krill Action Group (SKAG) and the Expert Group on Birds and Marine Mammals (EG-BAMM), as well as by SCAR-sponsored programmes including the Southern Ocean Observing System (SOOS) and Integrating Climate and Ecosystem Dynamics in the Southern Ocean (ICED). Planning for the new SCAR Scientific Research Programmes was also highlighted, and future outputs from the recently confirmed Ant-ICON, INSTANT and Ant-Climnow programmes will all be of great interest to CCAMLR. 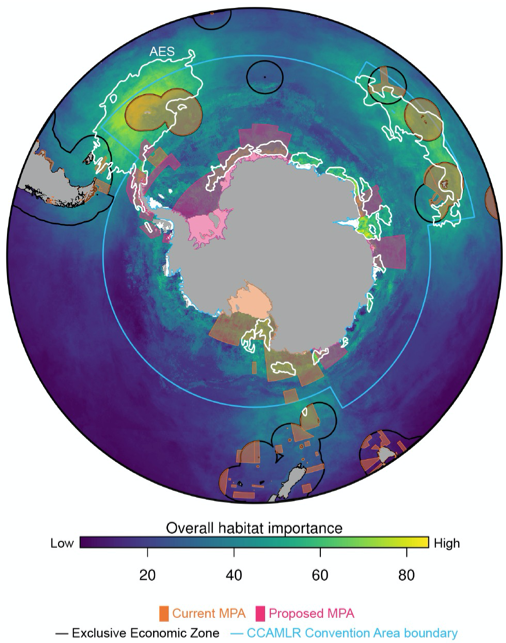 Of key interest to CCAMLR this year, SCAR presented the recent outputs of the Retrospective Analysis of Antarctic Tracking Data (RAATD) project. The RAATD team undertook an unprecedented circumpolar assessment of Areas of Ecological Significance derived from a 20-year analysis of tracking data for 17 species of birds and mammals, published earlier this year in Nature, together with a publicly available database of over 4000 individual animal tracks. Existing and proposed Marine Protected Areas (MPAs) overlap to a large extent with the Areas of Ecological Significance identified in the study, highlighting the value of these regions in the context of CCAMLR’s objective to develop a representative system of MPAs. The RAATD team also modelled the influence of changing climate scenarios on the predicted locations of these Areas of Ecological Significance, showing that MPAs may not remain aligned with important habitats in the future, and highlighting the importance of including considerations of climate change research in management decision-making.

A recent publication by members of SKAG was also welcomed by CCAMLR. The Scientific Committee continues to make progress towards a new krill fishery management strategy, and to benefit from advice provided by SKAG on krill biology and ecology, and changes to the southwest Atlantic krill stock.

SCAR also presented an update on recent climate change research relevant to the work of CCAMLR, summarising key publications on changes to the Antarctic physical and biological environments, including record warming at the South Pole, reductions in summer sea ice in the Weddell Sea, shifts in krill habitat, and the projected near extinction of some emperor penguin colonies. The update also highlighted recent work on new approaches integrating climate change considerations into management, including incorporating climate adaptation into MPA planning and best practices for an ecosystem approach to fisheries management under environmental change.

CCAMLR Members reiterated the importance of accessing the best available scientific information on climate change, and particularly SCAR’s role in helping to provide this. The Commission extended an invitation for SCAR to present a lecture summarising the next major update of its Antarctic Climate Change and the Environment (ACCE) Report, during the next CCAMLR meeting in 2021.