Bathymetry and Geological Setting of the Drake Passage 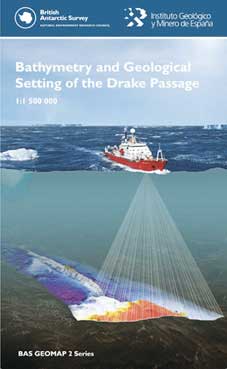 In December 2016, a new Antarctic map, “Bathymetry and Geological Setting of the Drake Passage”, was released.  This SCAR product represented an international collaborative effort coordinated by the Spanish Geological Survey (IGME) and the British Antarctic Survey (BAS), working together with the Korea Polar Research Institute (KOPRI), the Alfred Wegener Institute (AWI) and the United States Antarctic Program (USAP).

The map covers an area of 1470000 km2 between parallels 52ºS and 63ºS and between meridians 70ºW and 50ºW, where the high resolution bathymetric data covers more than 70% of the region with a 200 m cell resolution of the sea floor topography. The data were collected over the last 25 years on more than one hundred oceanographic cruises onboard six different Antarctic research vessels.  This initiative is part of SCAR's IBCSO (International Bathymetric Chart of the Southern Ocean) Expert Group, which recognises the importance of regional data compilations in Antarctic areas of particular scientific interest.  The map has been published by the BAS and the IGME, with support from SCAR through the Geosciences Group.

The Drake Passage is an oceanic gateway of approximately 850 km width located between South America and the Antarctic Peninsula that connects the southeastern Pacific and the southwestern Atlantic oceans and influences mantle flow, oceanographic water mass exchanges and migrations of biota. This gateway opened within the framework of the geological evolution of the Scotia Arc; a tectonic setting which developed since the early Oligocene and includes the Scotia and Sandwich plates. It is bounded to the north by the North Scotia Ridge, to the south by the South Scotia Ridge, to the west by the Shackleton Fracture Zone, and to the east by the South Sandwich Trench. The Scotia Sea contains several active and extinct spreading ridges that led to the opening of the Drake Passage. Several continental banks and oceanic basins are located in Scotia Sea, most notably in its southern part. 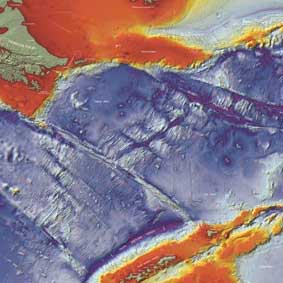 The geodynamic evolution of the region, seismic activity and tectonic data suggest a complex evolution of the Drake Passage such that the Shackleton Fracture Zone began as an oceanic ridge-to-ridge transform fault with strike-slip motion along most of its length, and subsequently became a transpressive transcurrent fault zone as it is at present. The Shackleton Fracture Zone, which occupies a central position in the Drake Passage, intersects two extinct spreading centres – the West Scotia Ridge (extinct 6.4 Ma ago) and the Phoenix-Antarctic Ridge (extinct 3 Ma ago), and is an intra-oceanic ridge which rises several hundreds to thousands of metres above the surrounding seafloor. Uplift of the Shackleton Fracture Zone in the last 8 Myr has formed a barrier for oceanic bottom currents.

The opening of the main southern oceanic gateways, Drake Passage and the Tasmanian gateway, separating South America and Australia from Antarctica respectively, permitted the present pattern of global ocean circulation to be established. This allowed extensive exchange of water between the main ocean basins and led to the development of the Antarctic Circumpolar Current, which contributed to the thermal isolation of Antarctica, was partially responsible for global cooling at the Eocene-Oligocene boundary and played an important role in middle Miocene cooling.

Reference of the map: