First lawyer to undertake Antarctic research in the field 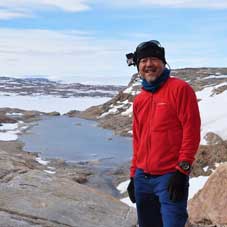 A member of the SCAR Standing Committee on Humanities and Social Sciences and co-leader of its Action Group on the Policy-Law-Science Nexus, Professor Akiho Shibata works to foster collaboration between natural scientists and social scientists, and to explore how international law can be used to create stability in international relations. He became the first lawyer to undertake field-based research in Antarctica.

A professor of international law at the Graduate School of International Cooperation Studies (GSICS) of Kobe University, Japan, Akiho has been a member of the Japanese delegation at Antarctic Treaty negotiations for many years. Then in 2016, to further his understanding of how the Antarctic Treaty System works to maintain Antarctica as a place for peace and science, and to experience the realities and difficulties of conducting scientific activities in the Antarctic whilst trying to protect the pristine environment, he took part in a 4-month long expedition to Antarctica to see for himself.

For full details, read the article in Mirage News.