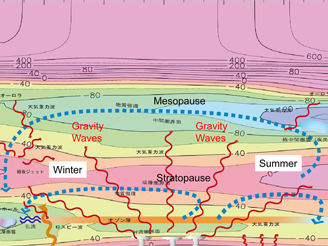 This special issue contains papers that deal with the theory, modelling and observations of gravity wave activity in the Polar Regions at any altitude in the Earth’s atmosphere. It also presents the results of the 3rd ANGWIN science workshop in April 2016.

Gravity waves are small‐scale waves (horizontal wavelengths of the order tens to hundreds of kilometers) in the atmosphere that are one of the main contributors to driving atmospheric circulation (Fritts & Alexander, 2003). As these waves propagate upward they become unstable and break, depositing their energy and momentum into the mean flow. They are generated by a range of mechanisms, for example, instabilities at the edge of the polar vortex, wind flow over topography, and the aurora.

Gravity waves are ubiquitous throughout the atmosphere, however in the Polar Regions there are hotspots of intense gravity wave activity. The small‐scale size of gravity waves means that they have to be represented by parameterizations in global numerical atmospheric models. These parameterizations do not accurately represent the momentum deposited in the atmosphere from gravity waves. This can cause problems in some models with middle atmospheric temperatures being too cold in the polar regions and the polar vortex dispersing too late (Garcia et al., 2017; McLandress & Scinocca, 2005). These parameterizations can be constrained and improved using observations of the gravity wave field, however there is a lack of comprehensive observations in the Polar Regions.

The Antarctic Gravity Wave Instrument Network (ANGWIN) was formed by Antarctic scientists wanting to develop a network of Antarctic gravity wave observatories, sharing data and standardizing analysis techniques in order to understand gravity wave processes on a continent wide scale (Moffat‐Griffin, 2015). This network has expanded over the years and now includes work in the Arctic and modeling gravity waves work.

This special issue came about as a result of the third ANGWIN international workshop (Moffat‐Griffin et al., 2017). The papers in this issue cover a range of ANGWIN activities and also observations from across the atmosphere.

Read about the collection in AGU EOS.

ANGWIN is a SCAR Action Group.