Antarctic Telescopes to the Rescue 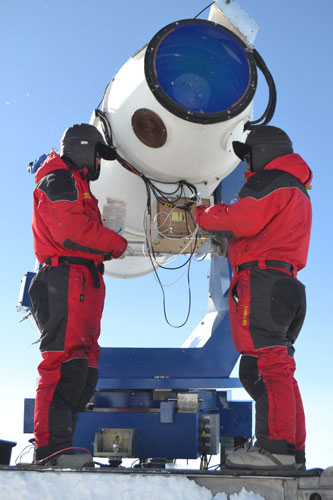 Dark skies, long nights, low temperatures, the Antarctic conditions have for a while been recognised as ideal for astronomical observations. The high plateau is already hosting several telescopes with plans of many more to come. The technical challenges of operating them is becoming routine and their scientific return more evident than ever.  But can these telescopes have a broader appeal?

Recent developments in the space industry are pointing to new applications for telescopes located in Antarctica, namely space safety and space communication. In the same manner that Antarctica is at the forefront of the study of climate change, it can play a big role in monitoring space traffic. The number of space debris has increased at an alarming rate over the last decade and threatens active satellites and space missions. Avoiding space collisions requires accurate knowledge of the objects’ orbits. Many of these objects, whether they are inactive satellites or bits of rockets, can be tracked from the ground with telescopes of modest aperture. These objects need constant monitoring as their orbit change constantly as they interact with the atmosphere or sun radiations.

The advantage of being near the poles becomes obvious when you consider that a large number of satellites are in Polar orbits and can therefore be visible more often than at other latitudes.Similarly, the long nights allow for frequent observations and in turn more accurate orbit parameters.

Observing space junk can be approached in two ways: a brute force approach which benefits from wider-field telescopes which will capture many objects at once and reduce error with repeated visits. The other approach which is to use telescopes with higher angular resolution which increases the accuracy of each individual measurement. This second strategy can be of value to track targets of high risk or value such as a newly launched satellite or a debris with a high chance of collision with say, the International Space Station. Regardless of the method, it is clear that the synergy between Antarctic Astronomy and near-earth traffic monitoring exists and starting to elicit the interest of the space community.

The other synergy is something that should grab the attention of every Antarctic scientist, in particular those whose research depends on large or time-sensitive data sets. One of the bottlenecks of scientific research in Antarctica is the low bandwidth of internet connections at many of the established bases. One technology that is being tested right now and could be available in Antarctica within 10 years, is laser communication between ground and space. Using a telescope, an optical or infrared laser beam can be transmitted to and from a satellite, many of which have capacities of Gigabits per second. The technical challenge of this technique is that the beam must be focused through the atmosphere which requires the telescope to be equipped with adaptive-optics, a technology quite common in astronomy. In the same way that star light is degraded as it passes through the atmosphere, laser light would need to be actively kept focused to reach the satellites with enough signal. This is again a situation where an Antarctic telescope could be given dual duties, performing astronomical observations during the bulk of its time with occasional pauses to send or receive data when the right satellite is overhead. While this capability is not available during the day, it is worth pointing out that infrared observations can work well into the twilight hours and therefore add weeks of useful time for communications in the remote places that need it the most.

The Antarctic sky is a rich source of data for astronomy and reason enough to build better and more performant telescopes in Antarctica. But this continent is also about collaboration and efficient sharing of resources and logistics. There is a chance here for Antarctic astronomers to do just that and help bring more value, both to the space and Antarctic research communities.