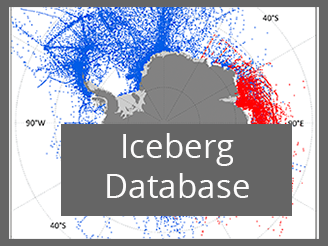 The Norwegian Polar Institute (NPI) initiated an international programme for systematic collection of Antarctic iceberg data in 1981. The initiative was motivated by a lack of data on the spatial and temporal distribution of icebergs in Antarctic waters. The program was endorsed by the Scientific Committee on Antarctic Research (SCAR) through its Working Group on Glaciology, and quickly gained support from nearly all SCAR nations. Already by the 1982/83 austral season, most ships going to Antarctica carried what became known as the “blue forms” on which the iceberg observations were recorded.

Throughout the 1980s and 1990s iceberg observations were recorded by most research vessels cruising Antarctic waters. Distribution of the blue forms ceased after the 2000/01 season. Nevertheless, data continued to be collected until the 2009/2010 season, when the programme was terminated. The SCAR International Iceberg Database also includes ship-based iceberg observations collected by the Australian Antarctic Division (AAD) from the Australian National Antarctic Research Expeditions ships, operating in the 50-150° E longitude sector.

The strength of the present database is the large number of observations using identical recording protocols for standard iceberg sizes, providing systematic coverage over most parts of the waters around Antarctica. These data sets give a solid, long term record of Antarctic iceberg sizes, movement, and distributions before the era of polar orbiting satellites and on-board remote sensors, along with inferred calculations of dissolution rates, ocean currents, etc., upon which future remotely sensed iceberg data can be compared and tested. The data are particularly useful because they include systematic observations of all the smaller sizes of icebergs, not covered by current satellite-based iceberg databases.

The database and its content are described in further detail in the attached data report and can be downloaded for use at https://doi.org/10.21334/npolar.2021.e4b9a604.