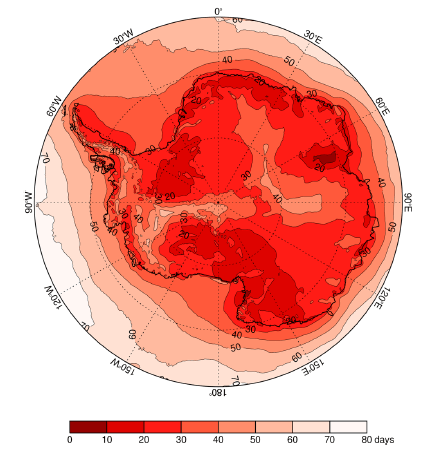 A new study has revealed the importance of extreme events in controlling the amount of snow falling across the continent.

Right: Map showing the importance of the highest precipitation events during the year. Darker colors indicate where the EPEs are more important.

Published this month in the journal Geophysical Research Letters, the study analysed daily Antarctic snowfall data starting in the 1970s. The study began when lead author, Professor John Turner (British Antarctic Survey)) was a SCAR Visiting Professor at the National Centre for Antarctic and Ocean Research in Goa, India. It reveals how the most extreme 10% of snowfall events account for up to 60% of annual snowfall in some places, and are the result of a few large storms that develop over the Southern Ocean.

In one particular case, 44% of annual snowfall occurred in a single day. Understanding the significance of these events is critical for scientists interpreting Antarctica’s past, as well as predicting how our climate may behave in future.

The Antarctic ice sheet is extremely important because of its potential contribution to global sea level rise. The mass of the ice sheet is constantly changing because of the ice gained by snowfall compared with the loss of ice at the margins via iceberg calving and melting.

Prof. John Turner says: “Antarctica is already the most extreme continent on earth – the windiest, the coldest, the driest. But even by Antarctic standards, we were surprised to see the extent to which a small number of extreme snowfall events are responsible for the marked differences in snowfall from year to year.

“They are often short-lived events, which arrive suddenly and deposit a large fraction of the year’s snowfall. If you are an ice core scientist trying to decipher messages from our past climate, and predict the future, knowing about these extreme weather events can be the missing part of the jigsaw.”

The international team, comprising scientists from India, France, China, Netherlands and the UK, were able to investigate snowfall across the Antarctic from 1979 to 2016 using the output of an atmospheric model called RACMO2. This was developed by Dutch researchers, and revealed the impact of the most extreme snow storms.

Text provided by British Antarctic Survey. Note: Content may be edited for style and length.