Dr Hogg, from the Centre for Polar Observation and Modelling and the University of Leeds, identified that the major glaciers flowing westwards from the Dyer Plateau on the Antarctic Peninsula are thinning and flowing at rates of more than 1.5 metres a day. Dr Hogg uses satellite data to study the remote Antarctic and Greenland Ice Sheets. Her research published in 2017 that identified the thinning of the Dyer Plateau and linked increase ice flow in Western Palmer Land to ocean melting would not have been possible without satellite observations. 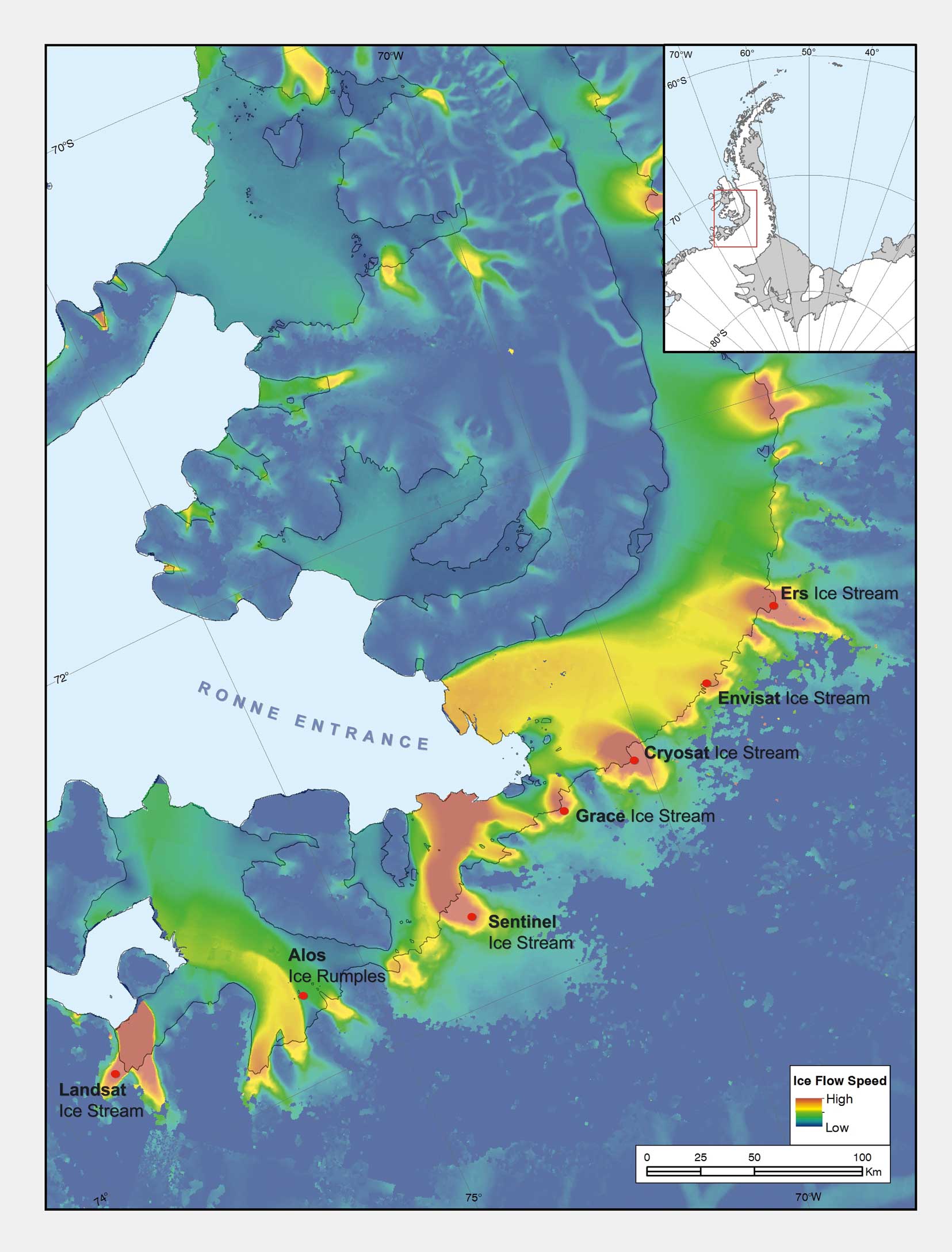 Dr Hogg said: “Naming the glaciers after the Earth observation satellites we use to measure them is a great way to celebrate the international collaboration in space, and on big science questions.

Satellite observations provide scientists with information on some of the most inaccessible regions on Earth. Without this data we would have a very unclear picture of how our rapidly changing environment is affecting glaciers around the world. The European Space Agency satellite missions allow us not only to understand the changes that are taking place in the fastest warming region on the planet but give us the means to predict what could happen to this region in the future."

In deference to the critical role that satellites play in measuring and monitoring Antarctic glaciology, Dr Hogg requested that seven glaciers monitored in her study be named after the satellites. The names will be added to the British Antarctic Territory Gazetteer and will be available for use on all maps, charts and in all future publications.

Dr Adrian Fox is a Chief Officer of SCAR’s Standing Committee on Antarctic Geographical Information (SCAGI), and Secretary of the UK Antarctic Place-names Committee. He commented on the key role of satellites in Antarctic science.

“The satellites and their sensors celebrated in the Antarctic place names include visible-band and radar systems that have been important for Antarctic glaciology, but satellite-borne sensors have also had a huge impact on other sciences such as geology, as well as mapping of the continent and operational planning and logistics.

The early Landsat satellites, launched in the mid-1970s, with 60 m resolution over a 185 km wide track transformed our understanding of the geography of Antarctica. These satellite images provided a much wider regional overview than could be achieved from aerial photography, showing how different regions fitted together and allowing remote regions to be mapped for the first time. Repeat coverage enabled regular monitoring of changes in the ice coastline.

Centre for Polar Observation and Modelling