Two poles, one common future: A call for strengthened action to preserve our poles and our planet

In the framework of its Polar Initiative, the Prince Albert II of Monaco Foundation co-organised its first scientific symposium on polar change "The Cold is Getting Hot! Polar Symposium: from the Arctic to Antarctic" on the 24th and 25th February 2022  in partnership with the Scientific Committee on Antarctic Research (SCAR), the International Arctic Science Committee (IASC), and the Oceanographic Institute of Monaco, Prince Albert I of Monaco foundation. More than a hundred leading scientists convened at the Oceanographic Museum in Monaco to discuss polar changes, impacts on people andtheeconomy, governance and solutions. 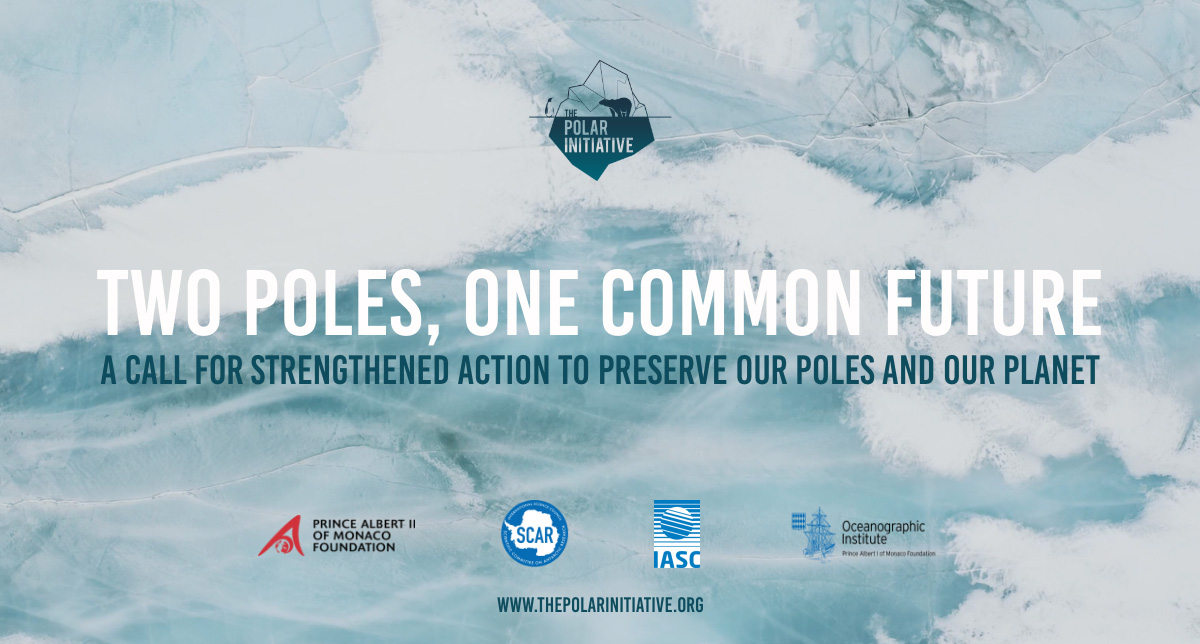 The significance of the frozen world for the global climate and human socioeconomic development is undeniable. But environmental changes in the Arctic and the Antarctic are accelerating, affecting local species and ecosystems, and impacting the broader climate and ecological systems far beyond the polar regions.

The event “Polar Oceans: engine to the global ocean” organized on June 28 in the frame of the UN Ocean Conference in Lisbon (June 27 -July 1, 2022) will be sharing the scientific conclusions of this symposium. HSH Prince Albert II of Monaco, polar scientists and advocates will gather to raise attention to the role of the Southern and Arctic Oceans in driving ocean and climate change.

THE FAST-CHANGING POLAR REGIONS
When we think of the polar regions, we tend to think of them as vast, remote, pristine. We think about narwhals and walruses, penguins and polar bears -remarkable species in continents far away from our minds and daily lives. And yet, both our history and our future are tightly linked to the cryosphere. We evolved in a glacial world. Despite their remoteness, polar regions are critical to our health and wellbeing and indispensable unbalancing the Earth's systems. The poles are home to extraordinary biodiversity,with new species and new genes being constantly discovered. Polar regions are the home of and provide food and livelihoods for hundreds of thousands of people, and they regulate our climate. From Reykjavik to Fiji, our lives are fundamentally and intimately connected to the poles. But polar regions are changing, right before our eyes and at an unprecedent pace in history. Human-induced climate change causes ice sheets to melt away, ocean circulation patterns to change, permafrost to thaw, polar oceans to warm and acidify. These changes come with consequences for human beings, wherever we live: sea level rise, disruption of the climate system and amplification of extreme flooding, drought and wildfire events, impacts on polar ecosystems and organisms that people depend on for their sustenance. These effects reinforce one another, bringing about impacts that are complex to comprehend and complicated to project. The retreating ice at the poles also comes with new economic opportunities for oil and gas exploitation, mineral extraction, fishing, tourism, shipping and transport, with associated risks for polar organisms, ecosystems and-in the Arctic-for indigenous people and local communities, in a complex geopolitical context. The poles can play a role in supporting the world’s need for food and energy, if long-term sustainability is put first, with the right balance of protection and utilization, and through truly inclusive and respectful participatory processes.
FACTS ARE CLEAR AND INDISPUTABLE
Robust science is key to inform sustainable and resilient development of the polar regions as well as meaningful and effective policy actions.
The symposium made it undeniable that some scientific facts are undisputable:
AN UNCERTAIN FUTURE
Large uncertainties remain though and, as new economic opportunities develop, the pace of polar research and scientific findings is not meeting the multiple needs for predicting the future trajectories of the growing changes taking place in the poles. Efforts must be pursued to continuously assess the impacts of the new activities upon the fragile ecosystem, while also further monitor biophysical and ecosystem features as well as the impacts of climate change upon polar systems and drawing scenarios.In the deep Weddell Sea, using state-of-the-art technology, world's largest fish breeding ground was discovered. The pharmaceutical industry, looking at its future in the polar regions, is spurring the rise of ‘bioprospecting’ and examining adaptation features of organisms that make their home in one of the most extreme environments in the world. Such a fundamental engine of the global gcean, atmosphere and climate systems, the polar worlds retain much unknown that, further researched, would help inform the scope of adaptation and protection that can still be attained in the face of climate change.
A CALL FOR IMMEDIATE ACTION
Sharing findings and views, participants of the Symposium call for further efforts to strengthen actions in favour of the protectionof the polar regions and a sustainable world, by :

The polar regions as we knew them are not the same today and will not be the same tomorrow. Some of the future change is inevitable, locked in by past and current emissions, but we retain the possibility to halt some of the adverse impacts, adapt to the change and preserve key functions of the ecosystems, even if the window to act is quickly closing. The most recent, indisputable scientific evidence not only defines the state of the environment and possible future courses, but also provides a roadmap of causation that underpins discerning the actions needed to start reversing the effects of decades of greenhouse gas emissions. Alongside HSH Prince Albert II of Monaco, whose long-lasting leadership on polar issues is internationally recognised, the partners of the Polar Initiative and the participants of the Symposium call for a greater protection of Arctic and Antarctic regions and for shedding a continuous light on the benefit they represent for the Planet and Humanity.

Partners of the Polar Initiative:

Since 2006, the Prince Albert II of Monaco Foundation (PA2F) has been working to protect the environment and promote sustainable development. Active at an international level, the Foundation focuses its actions on three main areas: limiting the effects of climate change and promoting renewable energies, preserving biodiversity, managing water resources and combating desertification. The Foundation works in three main geographical areas: the Mediterranean Basin, the Polar Regions and the Least Developed Countries. In 15 years, the PA2F has supported more than 700 projects, for almost 90 million euros.

The International Arctic Science Committee (IASC) is a non-governmental, international scientific organization that encourages and facilitates cooperation in all aspects of Arctic research, in all countries engaged in Arctic research and in all areas of the Arctic region. Overall, IASC promotes and supports leading-edge interdisciplinary research in order to foster a greater scientific understanding of the Arctic region and its role in the Earth system. Currently, 24 countries are represented.

The Scientific Committee on Antarctic Research (SCAR) is responsible for establishing, through scientific research and international cooperation, a broad understanding of the nature of Antarctica, the role of Antarctica in the Earth system and the effects of global change on Antarctica. The first SCAR meeting was held in The Hague from 3 to 6 February 1958. SCAR also provides objective and independent scientific advice to the Antarctic Treaty Consultative Meetings (ATCMs) and other organizations such as the IPCC.

The Oceanographic Institute, Prince Albert I of Monaco Foundation was founded by Prince Albert I, a passionate and visionary seafarer. Recognised as serving the public interest by French presidential decree on 16 May 1906, the Foundation has been working for the Ocean for more than a century. To promote the knowledge, love and protection of the Ocean, it brings together people from the world of politics, science, economics and associations and the general public. Managed by a Board of Directors assisted by a Scientific Council, it carries out its mission of environmental outreach via its two facilities, its international influence and the support of its partners.

Nadège Massé
Director of Communications
Prince Albert II of Monaco Foundation
This email address is being protected from spambots. You need JavaScript enabled to view it.

Johanna Grabow
Communications and Information Officer
Scientific Committee on Antarctic Research
This email address is being protected from spambots. You need JavaScript enabled to view it.

Federica Scarpa
Communication Manager
International Arctic Science Committee
This email address is being protected from spambots. You need JavaScript enabled to view it.