Physiological strategies of sponges and other simple animals to asses their vulnerability to climate change. 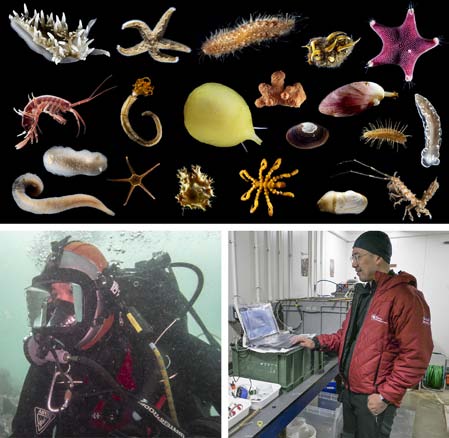 Dr Jackson Chu is a Postdoctoral Research Fellow at the Department of Ocean Sciences, Memorial University of Newfoundland in Canada. His fellowship was hosted by the British Antarctic Survey in the UK, where he worked with Dr Simon Morley from January – March 2020.

His project was titled "A macrophysiological framework for assessing the vulnerability of basal animals to climate change."

Simple animals such as sponges are predicted to be ‘winners’ as Antarctic ice shelves collapse because of their rapid recruitment and growth potential. However, it might be that the physiological strategies of these creatures differ or are altogether absent. The project aimed to quantify different oxygen regulation strategies among sponges and other simple animals to measure different physiological curves. These animals were common to the SCUBA zone around the Rothera Research Station of the British Antarctic Survey on the West Antarctic Peninsula. The results of these experiments were then compared to data from eight species from the Atlantic Ocean.

Jackson plans two primary publications as an outcome of his SCAR Fellowship. He also created a video-presentation for the Ocean Sciences Meeting in San Diego that was presented in his absence, and is looking forward to presenting his results in upcoming conferences. All the data from his Fellowship will be made available in open science data portals. Furthermore, Jackson also became the first Canadian scientific diver at Rothera Research station.

Jackson used the hashtag #Antarcticaeh to share his science imagery and impressions from Rothera Research Station.

He hopes to continue and expand his long-term collaboration with Dr Morley in the future. Their plan is to expand their experiments to include the Red Sea to capture the 'warm end' of marine life.

The SCAR fellowship allowed me to do novel research in one of the most remote and logistically challenging ecosystems on our planet.

The full report is available  pdf here (120 KB)  and on the SCAR Fellows webpage together with the full list of previous SCAR Fellows and available reports.

The SCAR Early-Career Fellowship Programme is designed to encourage the active involvement of early career scientists and engineers in Antarctic scientific research, and to build new connections and further strengthen international capacity and cooperation in Antarctic research. The work must be carried out in a research group of a SCAR member country different from that of the applicant's origin and current residence.