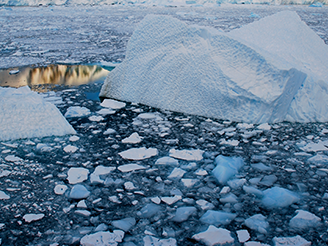 The Scientific Committee on Antarctic Research is the premier body facilitating scientific knowledge in, from and about Antarctica and the Southern Ocean, and providing advice to policymakers founded on the outcomes of this knowledge.

The SCAR community has contributed significantly to the IPCC Special Report on The Ocean and Cryosphere in a Changing Climate (SROCC), published on 25th September.

In response to the report, Professor Steven Chown, President of SCAR, said:

“The SROCC report tells us clearly and unambiguously - We must act ambitiously, quickly and in a sustained manner to reduce greenhouse gas emissions if we are to avoid a world that is unrecognizable and less able to sustain life than the one we have depended on until now.”

“We have time, but it is running out quickly.”

SROCC provides the latest scientific knowledge, focussing on the oceans and cryosphere, agreed by scientists, and accepted by governments, demonstrating that the Earth System is changing rapidly due to human activity, and that, without action, this change will continue to accelerate.

Professor Chown emphasized that: “This change will be to our detriment and have large impacts on the species and ecosystems on which we depend, if we do not rapidly re-imagine and re-arrange the ways in which we live.”

The report demonstrates, using the best available current knowledge, that Antarctica and the Southern Ocean play key roles in the climate system and sea level rise.

It emphasizes that Antarctica has the potential to lead to sea-level rise of several metres within a few centuries. Highlighting the acceleration of ice flow and its rapid retreat in parts of Antarctica, it points to a threefold increase in ice lost over the period 2007–2016 relative to 1997–2006.

“The dynamics of the Antarctic ice sheet and it's climatic triggers constitute the major source of uncertainty about sea level rise. This emphasizes the crucial role of research into these processes” said Dr Catherine Ritz, SCAR Vice President.

Understanding the Antarctic is critical for insight into how the Earth System has responded to human forcing of the climate system until now, and what the responses might be in the future, depending on our choices. Those responses will also have profound effects on Antarctica’s ecosystems and its iconic species: whales, penguins, albatrosses and seals.

“SCAR and key partners have at the same time as the release of the SROCC report outlined the science most urgently needed from Antarctica and the Southern Ocean to forge new understanding of what the future holds for both the region and its effects on the planet” noted Dr Chandrika Nath, Executive Director of SCAR.

SCAR recognizes that we have the knowledge needed to act and that more research is vital to inform that action. We have the understanding of how to ensure that knowledge gained from research delivers effective policy. And we have the support of governments for this work, demonstrated most clearly by the 2019 commitment of the Antarctic Treaty Consultative Parties.

“The IPCC SROCC makes clear, as the IPCC has previously, that we know what to do, need to act now and have the time to do so. The only time that has run out is time for inaction.” concluded Prof Chown.

This email address is being protected from spambots. You need JavaScript enabled to view it., SCAR President (Australia) or