The 2019 Standing Committee on the Humanities and Social Sciences (SC-HASS) Conference was held in Ushuaia in April 2019. It was attended by 125 participants and covered themes such as historical strategies of exploration, present challenges for the Antarctic treaty System, tourism in Antarctica, public engagement, and Antarctic culture and literature.

Other topics for discussion included:

The final lecture of the conference was the Lewander lecture on “Housewives in Antarctic: A Chronicle of power and gender in the white continent, 1980” by Nelson Llanos. 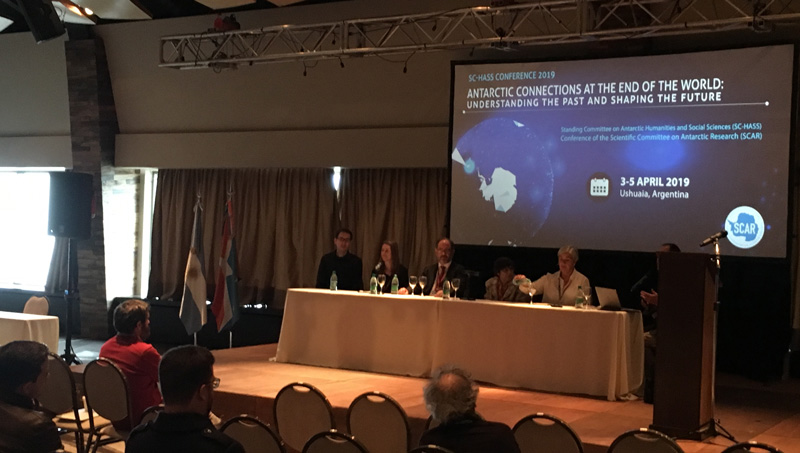 PhD student Iqra Choudhry attended the conference. For her PhD Iqra is working with the SCAR archives. Her project is titled “Unlocking the SCAR archive: the sixty-year long consolidation of Antarctic governance through polar research”.  Iqra writes about her experiences at the Ushuaia conference, below:

Having never been to anywhere in the Southern Hemisphere before, I was incredibly excited to visit the host city for the SC-HASS 2019 meeting: Ushuaia. I’d heard my fellow humanities scholars talk about travelling through the city on the way to Antarctica; seen it on my TV screen whilst watching The Man Who Cycled The Americas, and I was not disappointed by the breath-taking beauty of the city and its surroundings when I arrived after 21 hours of travel.

The conference was hosted at Hotel Arakur, which provided gorgeous views over the city below, the mountains surrounding it and the Beagle Channel. The introduction to the conference included a series of welcoming speeches from members of the local organising committee and representatives of local government; a speech by SCAR Vice President Jefferson C. Simões which acknowledged the importance of humanities and social sciences research, and an emotional welcoming address by SC-HASS co-chair Daniela Liggett. In it, she paid tribute to the recent events in Christchurch and reiterated that everyone, regardless of their background or religious belief, was welcome in the HASS community. As an Early Career Researcher in Polar Humanities, and as a young Muslim woman, I still struggle to put into words exactly how much this meant to me.

This spirit of the conference aligned with its theme of ‘Antarctic Connections at the End of the World’ – this spirit of engaging with peers across borders; of friendship and openness and not just an acceptance of our differences, but a celebration of them, was something I felt throughout the conference, and it made me proud to be part of such a friendly and warm community of researchers.

SC-HASS 2019 was my first Antarctic Humanities and Social Sciences conference, and I wanted to attend as many sessions as possible. Choosing between sessions was difficult, and my highlights from the conference are varied.  Ignacio Cardone’s talk on the origins of the British Antarctic Epistemic Community shed light on the events that shaped the Antarctic community during the heroic era in the UK, drawing from the work he carried out during his time in London.

Andrew Avery’s presentation on ‘the loneliest post office in the world’ provided an entertaining and unique insight into the process by which the British pressed claims to Antarctica through bureaucratic means – namely, establishing a Post Office in the South Atlantic, with ‘postmasters for Antarctica’.

Other highlights of the conference included (but are not limited to) Hanne Nielsen’s talk on ‘Antarctic advertising’; Elizabeth Leane’s appraisal of literature about Antarctica; Gabriela Roldan’s presentation on conceptualising Antarctic gateway cities and the work done by Daniela Liggett and Bob Frame, investigating the ways in which visitors to Antarctic Heritage sites perceived them.

Research that stood out to me especially was Kati Lindstrom’s investigation of Chilean and Japanese perspectives on the Convention on the Regulation of Antarctic Mineral Resource Activities (CRAMRA) negotiations. Her talk started an important conversation on the need to learn other languages, to engage with source material in languages other than English, and the importance of working across borders and fostering connections with academics who work in other languages.

The last day of the conference saw the Lewander Lecture delivered by Nelson Llanos, who gave a fascinating talk about the women who lived and worked in Antarctica in the 1980s at Villa Las Estrellas, the first Chilean civilian settlement in Antarctica. 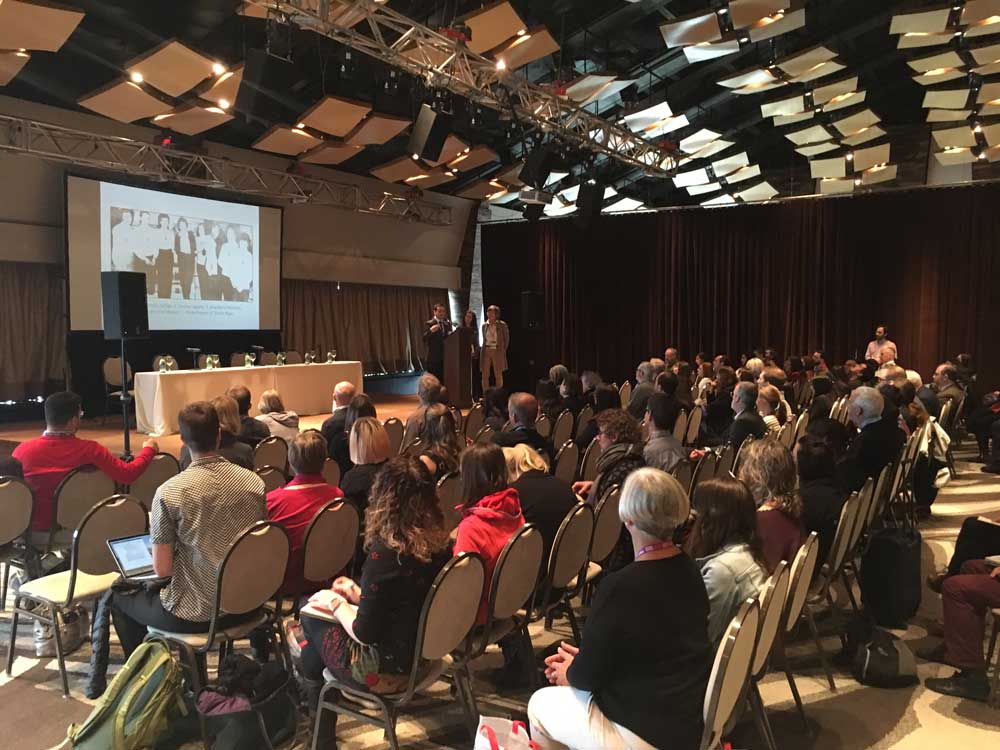 The SC-HASS Business Meeting rounded up three days of productive discussions and sharing of research, allowing members of the community to have their say in its future, and the projects and collaborations to come.

Thank you to Iqra and to SCAR Vice President Jefferson C. Simões for providing their accounts of SC-HASS 2019. Photos by Jefferson Simões.