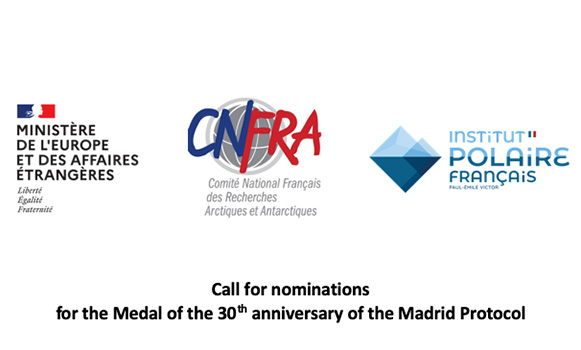 On October 4th, 2021, the States being Parties of the Antarctic Treaty System will celebrate the 30th anniversary of the Madrid Protocol.

This landmark Protocol complementing the Antarctic Treaty has designated Antarctica as a “natural reserve, devoted to peace and science” and has set key principles for framing human activities in the area covered by the Treaty, for the benefit of environmental protection of Antarctica as a whole.

At the 43rd Antarctic Treaty Consultative Meeting in June 2021, France – being the organizing country and which co-initiated with Australia in 1989 the international negotiations that led to the signature of the Protocol on October 1991 – wants to acknowledge the importance of the Madrid Protocol by rewarding for the first time a scientist whose research contributed to support the spirit behind the Protocol.

The Medal of the 30th anniversary of the Madrid protocol will recognize an outstanding contribution in any of the following fields of science:

Applications are open to all nationals of a country that ratified the Madrid Protocol.

To encourage nominations and ensure an open, fair and transparent selection process, the recipient of the medals will be selected by a dedicated committee. There are no age or gender restrictions. However, each person can only propose one nomination. Self-nominations are not accepted.

The medal will be personally* given to the recipient by the French Minister of Foreign Affairs, M. Jean-Yves Le Drian, during a ceremony organized at the Ministry headquarters in Paris, aside from the ATCM meeting. (*Depending on the evolution of the Covid-19 pandemic, the medal will be given in person or through a distance celebration. In the first case, the awardee will see his travel and accommodation fees in Paris taken in charge by the Ministry.)

Applications must be submitted to the French national committee for Arctic and Antarctic Research (CNFRA, This email address is being protected from spambots. You need JavaScript enabled to view it.) no later than April 30th, 2021.
Please use this form for your nomination. The result will be announced on May 20th, 2021.