During the austral summer 2019-20, a large, cross-Antarctica campaign to evaluate spatial and temporal changes of surface mass balance (SMB) with water stable isotopes was realised by Mathieu Casado from AWI (Alfred Wegener Institute, Potsdam, Germany), in collaboration with Amaelle Landais, Elise Fourré, Frederic Prié, Olivier Jossoud and Christophe Leroy-Dos Santos from LSCE (Laboratoire des Sciences du Climat et de l’Environnement, France), Pete Akers, Joël Savarino, and Ghislain Picard from IGE (Institut des Geosciences de l’Environnement, France), and with the participation of winterover crews at the stations of Dumont d’Urville and Dome C, of the consortia of the EPICA and Beyond EPICA – Oldest Ice ice cores, of the EAIIST traverse program, of the French and German Polar Institutes IPEV, ENEA and AWI. As the input term of the ice sheet dynamic, precise SMB determination is crucial, yet, in Antarctica, it is very difficult to estimate precise SMB values due to limited capacity to measure precipitation amounts, sublimation and condensation rates, and wind/firn interaction. 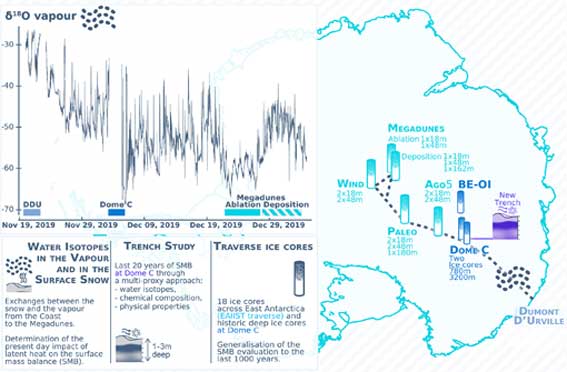 During this campaign, Mathieu Casado combined different techniques linked to the use of water isotopes as a tracer of hydrological processes to evaluate the relative contributions of precipitation, sublimation and condensation and stratigraphic noise to the SMB for various types of climate ranging from mild coastal areas in Adélie Land to some of the driest areas of the East Antarctic Plateau, such as ablation areas of the Megadunes characterised by local negative accumulation, or Dome C surroundings where low accumulation and large ice thickness provided the longest spanning ice core to date, ranging over 800 000 years.

First, in the framework of the EAIIST traverse, linking the french Station Dumont d’Urville to the megadunes sites and passing through Dome C (Fig. 1), simultaneous monitoring of water vapour and snow isotopic composition will provide insights on the exchanges between the atmosphere and the firn. These measurements, combined in-situ and satellite evaluation of precipitation and accumulation rates, will provide the necessary data to constrain the various components of the SMB for a large range of conditions found in Antarctica for present days.

These results will be combined with year-long monitoring at the two fixed locations of Dumont d’Urville and Dome C and generalised to winter conditions through work within the project Adelise. Additional constrains to extend these results to longer time scales will be obtained by comparing the water isotopic composition in the first 1.5 meters of the firn at Dome C to snow physical properties (SSA, density, stiffness…) and impurities in a 50 m long trench. The isotopic signal from this trench study, covering up to 20 years of snow accumulation, includes clear signatures of precipitation intermittency, sublimation and condensation, wind blowing and metamorphism, key processes in the determination of the SMB in central Antarctica. 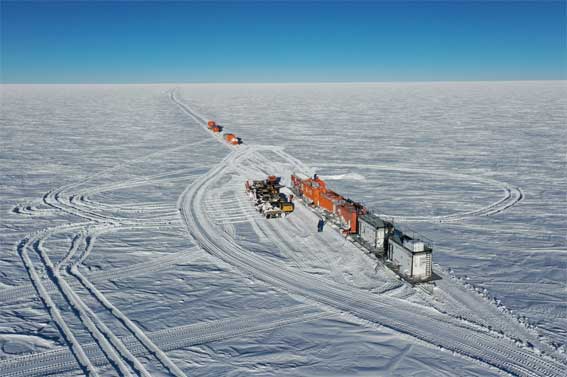 These results will be linked to past Antarctic conditions through a network of ice cores drilled across the East Antarctic Plateau, and in particular of replicates of ice cores covering the same period at Dome C, Little Dome C, and the different sites covered in the EAIIST traverse. Extending the result of the trench study to the last glacial period, we will evaluate how much of the precipitation amount decrease linked to colder temperatures explains the decreased accumulation compared to other processes in the hydrological cycle such as sublimation and condensation.

Mathieu Casado is a Humboldt research fellow at AWI, in strong collaboration with LSCE, and a member of the PAIS steering committee, working on links between the water isotopes and the surface mass balance, and how this affects the quality of past climate reconstructions from ice core records.The EAIIST traverse has been logistically supported by the French Polar Institute (IPEV) and PNRA, and financially by the ANR, the foundation BNP-Paribas and the foundation Albert 2 de Monaco project Antarctic-Snow.