New Paper on Paleobathymetry of the Southern Ocean 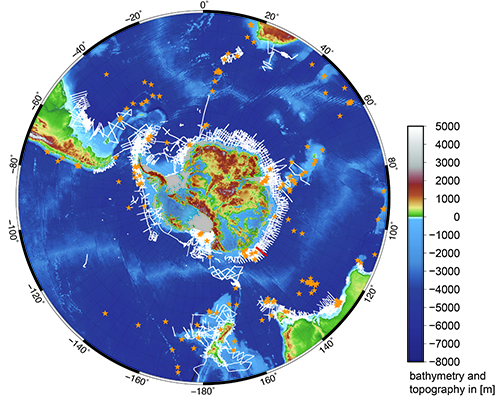 A new paper "The evolving paleobathymetry of the circum‐Antarctic Southern Ocean since 34 Ma – a key to understanding past cryosphere‐ocean developments" has been published in Geochemistry, Geophysics, Geosystems. The project contributes to the SCAR's Scientific Research Programme Past Antarctic Ice Sheet Dynamics (PAIS).

The Southern Ocean is the only ocean, which connects all three major world’s oceans and therefore plays a vital role in our planet’s oceanographic and atmospheric systems. The new paper reconstructs the changing depth and geometry of the Southern Ocean seafloor since the establishment of a major ice sheet in Antarctica (34 Ma). It also provide an inventory of ice-sheet eroded sediments deposited in the Southern Ocean, which has previously been highly underestimated. This ocean-wide study shows the development of the Southern Ocean from individual, separated basins into the home of the strong Circumpolar current system, by the deepening of the land bridges between Antarctica and Australia and Antarctica and South America. The sediments deposited in the Southern Ocean, especially along the Antarctic margin, illustrate the growth and retreat of the Antarctic ice sheets showing two distinct pulses of enhanced sedimentation at the first continental-scale glaciation of Antarctica (34 Ma) and after the warm phase of the Miocene Climatic Optimum. On a local and regional scale, the authors trace the amount of erosion provided by glacier systems along the Antarctic coast.

The presented suite of seafloor grids as well as sediment isopach grids have been made available to the geoscientific community on the PANGAEA database and are an important additional input parameter for paleo-models.

You can read the full paper here.