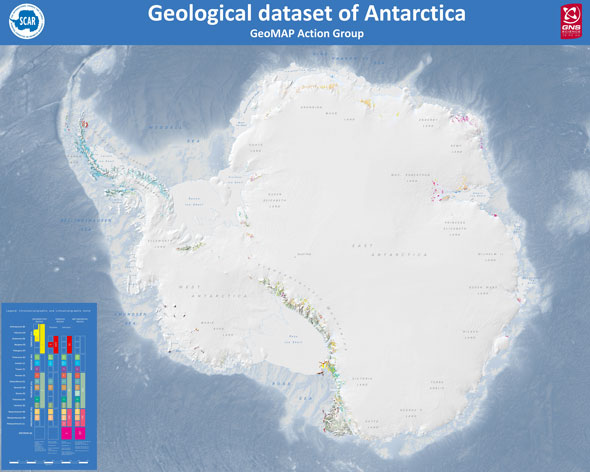 Antarctica’s environment will be highly vulnerable as the global climate warms. Studying Antarctica’s geology is pivotal for understanding how the continent has been affected by climate change in the past and how it may react to potential future changes.

The GeoMAP project led by GNS Science is a world-first digital database of Antarctica’s geology, providing a catalogue of every area of exposed rock by type and age on the continent. Building on the long legacy of mapping done in Antarctica, the project translated hundreds of hard-copy paper maps representing 52,000km2 of land into a modern digital source.

Because there is always new research taking place and information sources change – for example, there is now an abundance of high-resolution satellite imagery of Antarctica - the database has been designed to be editable and improved over time. The result is a “Wikipedia” of Antarctic geology that conforms to international data standards, is accurate and will have wide interdisciplinary application.

The database signals an important science shift from studying Antarctica’s ‘deep time’ evolutionary geology to the current focus on glacial geology and climate. Rocks play an important role in the complex interaction of land, atmosphere and climate. Having an accurate digital record of the continent’s surface geology will be invaluable to researchers in the coming years.

For example, piles of gravel left behind from waxing and waning ice sheets help researchers understand Antarctica’s glacial dynamics. The composition and colour of exposed rocky outcrops affect ice melt patterns. And underneath the ice in the Earth’s crust, different types of rocks emit heat which may contribute to the melting of ice. Other applications from GeoMAP include better understanding biological processes that allow lichen and moss species to colonise warming areas of the continent.

The project was led by GNS Science with international collaboration with the Scientific Committee on Antarctic Research, involving 18 collaborators from 12 nations. To learn more visit the GeoMap group page.