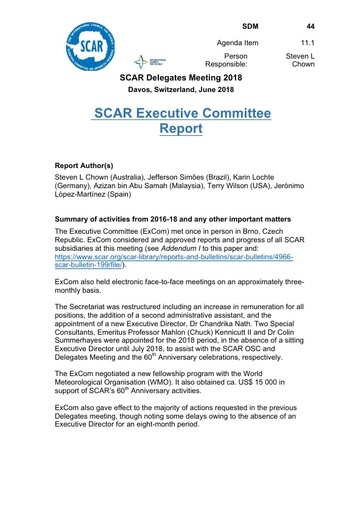 Summary of activities from 2016-18 and any other important matters

The Executive Committee (ExCom) met once in person in Brno, Czech Republic. ExCom considered and approved reports and progress of all SCAR subsidiaries at this meeting (see Addendum I to this paper and: https://www.scar.org/scar-library/reports-and-bulletins/scar-bulletins/4966- scar-bulletin-199/file/). ExCom also held electronic face-to-face meetings on an approximately three-monthly basis.

The Secretariat was restructured including an increase in remuneration for allpositions, the addition of a second administrative assistant, and the appointment of a new Executive Director, Dr Chandrika Nath. Two SpecialConsultants, Emeritus Professor Mahlon (Chuck) Kennicutt II and Dr Colin Summerhayes were appointed for the 2018 period, in the absence of a sitting Executive Director until July 2018, to assist with the SCAR OSC and Delegates Meeting and the 60th Anniversary celebrations, respectively.

The ExCom negotiated a new fellowship program with the World Meteorological Organisation (WMO). It also obtained ca. US$ 15 000 in support of SCAR’s 60th Anniversary activities. ExCom also gave effect to the majority of actions requested in the previous Delegates meeting, though noting some delays owing to the absence of an Executive Director for an eight-month period.