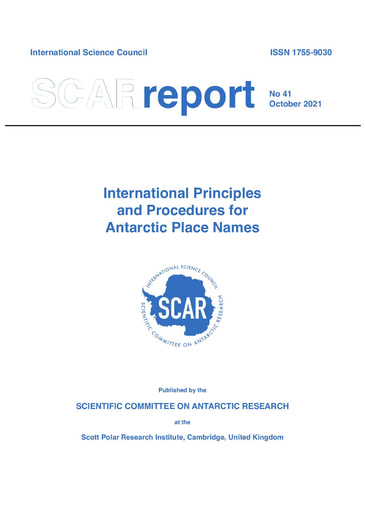 Antarctic place names are important for identification, orientation, positioning and navigation, providing an essential reference system for logistical operations (including search and rescue measures), management, environmental investigation and protection, scientific research, culture, tourism, and preservation of heritage.  They facilitate the exchange of information in the field, in scientific publications and in administrative measures of the Antarctic Treaty System.  Place names also reflect the history of exploration of the continent.

Principles and procedures for using existing names and for proposing new names and changes have not been previously established internationally.  Traditionally, each country has established its own principles and policies, which has resulted, in many cases, in the multiple naming of features, the translation or mistranslation of place names, and ambiguity and confusion in the current use of names in Antarctica.

In 1992, the Composite Gazetteer of Antarctica was compiled to provide a central storage of all existing place names of Antarctica. A set of guidelines to be followed both when selecting an existing name for a feature and when proposing new names or changes to existing names was also developed, and a draft version was distributed in 1994. This report builds on those guidelines.

Antarctica has no single naming authority so individual countries are responsible for their national policy on, and authorisation and use of, Antarctic names. This document provides signatories to the Antarctic Treaty with clear principles and procedures for the use of existing names for features in Antarctica (south of 60°S) and for the application of new names for previously unnamed features on maps, in scientific publications, and in databases.

SCAR, through its recommendations, hopes that the present effort will contribute to the adoption of 'one name per feature' by all Antarctic place-naming authorities to minimize ambiguity and avoid confusion.

To assist with the procedure for naming an unnamed Antarctic feature, SCAR has developed an document Antarctic Place Name Proposal Form (20 KB) .