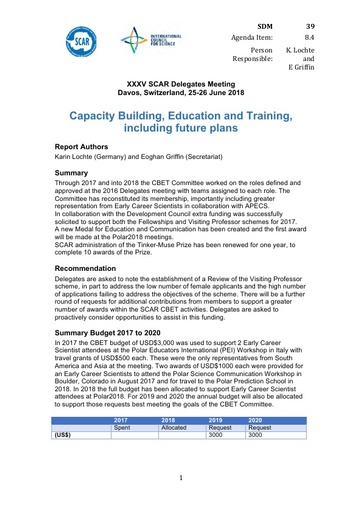 Through 2017 and into 2018 the CBET Committee worked on the roles defined and approved at the 2016 Delegates meeting with teams assigned to each role. The Committee has reconstituted its membership, importantly including greater representation from Early Career Scientists in collaboration with APECS.

In collaboration with the Development Council extra funding was successfully solicited to support both the Fellowships and Visiting Professor schemes for 2017.

A new Medal for Education and Communication has been created and the first award will be made at the Polar2018 meetings. SCAR administration of the Tinker-Muse Prize has been renewed for one year, to complete 10 awards of the Prize.

Delegates are asked to note the establishment of a Review of the Visiting Professor scheme, in part to address the low number of female applicants and the high number of applications failing to address the objectives of the scheme. There will be a further round of requests for additional contributions from members to support a greater number of awards within the SCAR CBET activities. Delegates are asked to proactively consider opportunities to assist in this funding.