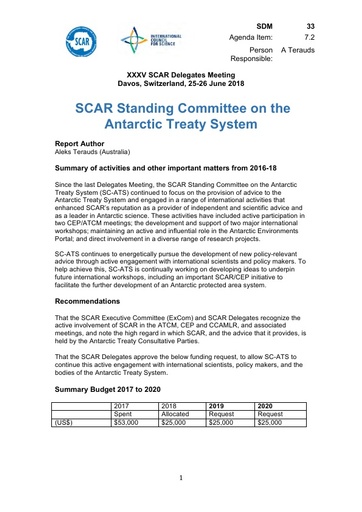 Summary of activities and other important matters from 2016-18

Since the last Delegates Meeting, the SCAR Standing Committee on the Antarctic Treaty System (SC-ATS) continued to focus on the provision of advice to the Antarctic Treaty System and engaged in a range of international activities that enhanced SCAR’s reputation as a provider of independent and scientific advice and as a leader in Antarctic science. These activities have included active participation in two CEP/ATCM meetings; the development and support of two major international workshops; maintaining an active and influential role in the Antarctic Environments Portal; and direct involvement in a diverse range of research projects. SC-ATS continues to energetically pursue the development of new policy-relevant advice through active engagement with international scientists and policy makers. To help achieve this, SC-ATS is continually working on developing ideas to underpin future international workshops, including an important SCAR/CEP initiative to facilitate the further development of an Antarctic protected area system.

That the SCAR Executive Committee (ExCom) and SCAR Delegates recognize the active involvement of SCAR in the ATCM, CEP and CCAMLR, and associated meetings, and note the high regard in which SCAR, and the advice that it provides, is held by the Antarctic Treaty Consultative Parties. That the SCAR Delegates approve the below funding request, to allow SC-ATS to continue this active engagement with international scientists, policy makers, and the bodies of the Antarctic Treaty System.