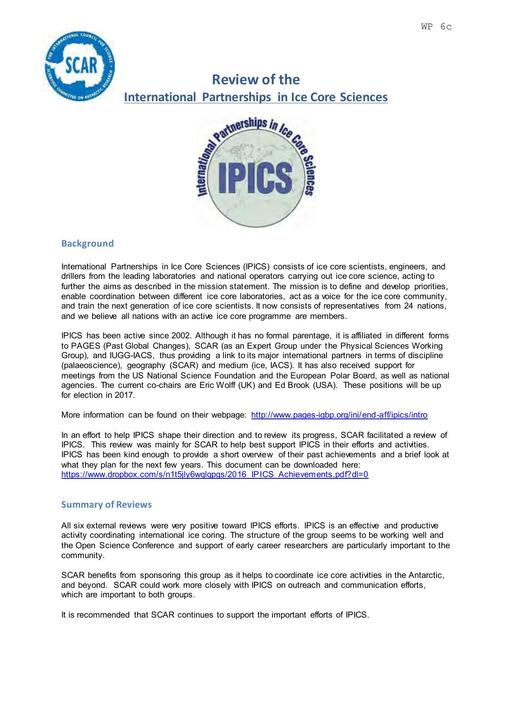 International Partnerships in Ice Core Sciences (IPICS) consists of ice core scientists, engineers, and drillers from the leading laboratories and national operators carrying out ice core science, acting to further the aims as described in the mission statement. The mission is to define and develop priorities, enable coordination between different ice core laboratories, act as a voice for the ice core community, and train the next generation of ice core scientists. It now consists of representatives from 24 nations, and we believe all nations with an active ice core programme are members.

IPICS has been active since 2002. Although it has no formal parentage, it is affiliated in different forms to PAGES (Past Global Changes), SCAR (as an Expert Group under the Physical Sciences Working Group), and IUGG-IACS, thus providing a link to its major international partners in terms of discipline (palaeoscience), geography (SCAR) and medium (ice, IACS). It has also received support for meetings from the US National Science Foundation and the European Polar Board, as well as national agencies. The current co-chairs are Eric Wolff (UK) and Ed Brook (USA). These positions will be up for election in 2017.

In an effort to help IPICS shape their direction and to review its progress, SCAR facilitated a review of IPICS. This review was mainly for SCAR to help best support IPICS in their efforts and activities. IPICS has been kind enough to provide a short overview of their past achievements and a brief look at what they plan for the next few years.