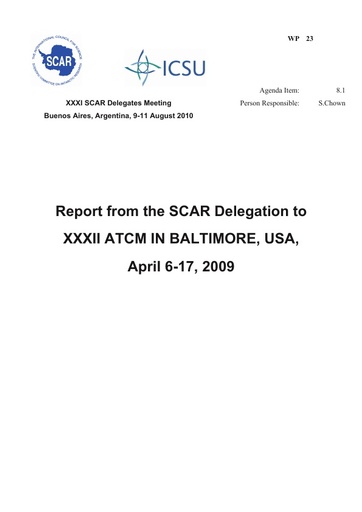 Title: Report from the SCAR Delegation to XXXII ATCM in BALTIMORE, USA, April 6-17, 2009

Relevant URLs or references to other reports: www.ats.aq

Introduction/ Background: This report summarises the SCAR contribution to the CEP and ATCM meetings held in Baltimore 2009

The XXXII Antarctic Treaty Consultative Meeting (ATCM) took place in Baltimore, MD, USA at the Baltimore Convention Centre from 6th to 17th April 2009. In parallel with the start of the Committee on Environmental Protection (CEP) XII on April 6th, a joint session between the ATCPs and the Arctic Council was held at the US State Department in Washington. US Secretary of State Hilary Clinton, and the President of the Arctic Council addressed the joint meeting. It featured the endorsement of a joint Ministerial Declaration on the International Polar Year 2007-2008 (IPY) (Appendix 1). The session was followed by an afternoon presentation on the science of IPY by US scientists at the US National Academy’s headquarters, in Washington, DC.

SCAR provided one Working Paper and nine Information Papers (one on behalf of the IPY International Project Office).

Budget Implications: Funds are budgeted so the SCAR Delegation can attend the CEP/ATCM meetings. SCAR’s work with the Antarctic Treaty System has also to be funded through SC-ATS