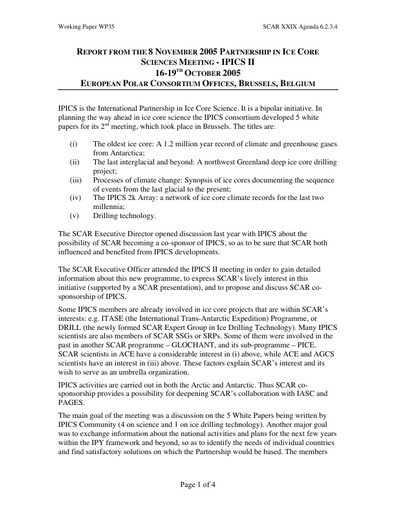 IPICS is the International Partnership in Ice Core Science. It is a bipolar initiative. In planning the way ahead in ice core science the IPICS consortium developed 5 white papers for its 2nd meeting, which took place in Brussels. The titles are:

The SCAR Executive Director opened discussion last year with IPICS about the possibility of SCAR becoming a co-sponsor of IPICS, so as to be sure that SCAR both influenced and benefited from IPICS developments.

The SCAR Executive Officer attended the IPICS II meeting in order to gain detailed information about this new programme, to express SCAR’s lively interest in this initiative (supported by a SCAR presentation), and to propose and discuss SCAR co- sponsorship of IPICS.

Some IPICS members are already involved in ice core projects that are within SCAR’s interests: e.g. ITASE (the International Trans-Antarctic Expedition) Programme, or DRILL (the newly formed SCAR Expert Group in Ice Drilling Technology). Many IPICS scientists are also members of SCAR SSGs or SRPs. Some of them were involved in the past in another SCAR programme – GLOCHANT, and its sub-programme – PICE. SCAR scientists in ACE have a considerable interest in (i) above, while ACE and AGCS scientists have an interest in (iii) above. These factors explain SCAR’s interest and its wish to serve as an umbrella organization.

IPICS activities are carried out in both the Arctic and Antarctic. Thus SCAR co- sponsorship provides a possibility for deepening SCAR’s collaboration with IASC and PAGES.

The main goal of the meeting was a discussion on the 5 White Papers being written by IPICS Community (4 on science and 1 on ice drilling technology). Another major goal was to exchange information about the national activities and plans for the next few years within the IPY framework and beyond, so as to identify the needs of individual countries and find satisfactory solutions on which the Partnership would be based. The members also discussed urgent issues on development of environmental friendly drilling technologies.

Both PAGES and SCAR presented their point of view and their expectations in connection with IPICS (the SCAR presentation is available upon request from the SCAR Secretariat). During the meeting I had an opportunity to investigate how SCAR is seen by the scientists outside SCAR. I discovered that few people know about the recent changes in SCAR structure and way of working and therefore I modified my original presentation so as to add information about recent changes in SCAR. I had an impression that scientists genuinely appreciate it if a representative from SCAR takes part in science meetings. From our perspective these meetings provide another, more personal, form of communication with scientists. By attending such meetings we can identify the urgent issues that might need special attention from SCAR, without a need to be specifically told about them. The meetings also provide an opportunity to tighten the links between the Executive of SCAR and the scientists, to observe the development of collaborations, and to provide some help to initiate new ones.

I was unable to attend the closing discussion on how IPICS would like to relate to umbrella organizations. However, we expect a report from the IPICS meeting to SCAR from Dr Rob Mulvaney. The Chairman of the IPICS II meeting, Dr Eric Wolff, expressed the wish to discuss the possible levels of co-sponsorship and partnership between IPICS and SCAR during an informal meeting at SCAR Secretariat in early December 2005 (scheduled for December 5th). The potential for SCAR to formalise its link to this important scientific community seems quite high.