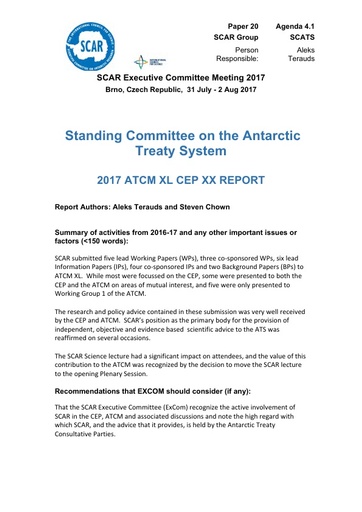 SCAR submitted five lead Working Papers (WPs), three co-sponsored WPs, six lead Information Papers (IPs), four co-sponsored IPs and two Background Papers (BPs) to ATCM XL. While most were focussed on the CEP, some were presented to both the CEP and the ATCM on areas of mutual interest, and five were only presented to Working Group 1 of the ATCM.

The research and policy advice contained in these submission was very well received by the CEP and ATCM. SCAR’s position as the primary body for the provision of independent, objective and evidence based scientific advice to the ATS was reaffirmed on several occasions.

The SCAR Science lecture had a significant impact on attendees, and the value of this contribution to the ATCM was recognized by the decision to move the SCAR lecture to the opening Plenary Session.