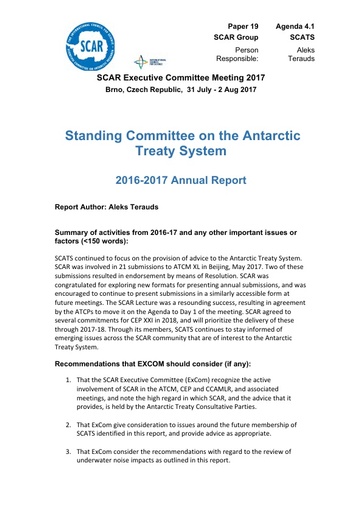 SCATS continued to focus on the provision of advice to the Antarctic Treaty System. SCAR was involved in 21 submissions to ATCM XL in Beijing, May 2017. Two of these submissions resulted in endorsement by means of Resolution. SCAR was congratulated for exploring new formats for presenting annual submissions, and was encouraged to continue to present submissions in a similarly accessible form at future meetings. The SCAR Lecture was a resounding success, resulting in agreement by the ATCPs to move it on the Agenda to Day 1 of the meeting. SCAR agreed to several commitments for CEP XXI in 2018, and will prioritize the delivery of these through 2017-18. Through its members, SCATS continues to stay informed of emerging issues across the SCAR community that are of interest to the Antarctic Treaty System.