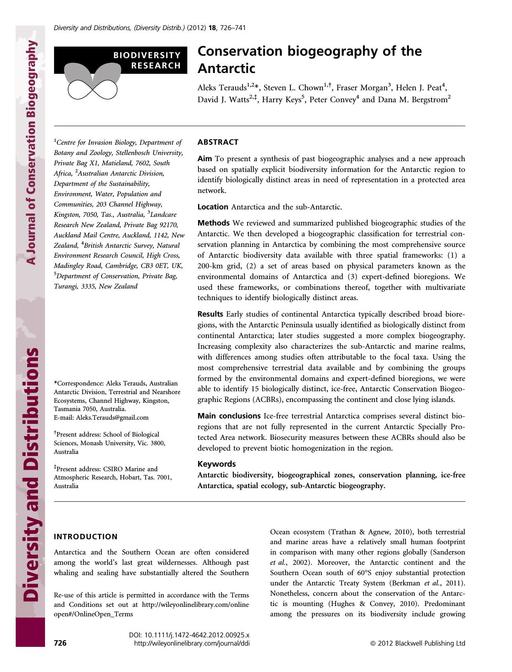 Aim To present a synthesis of past biogeographic analyses and a new approach based on spatially explicit biodiversity information for the Antarctic region to identify biologically distinct areas in need of representation in a protected area network.

Location Antarctica and the sub-Antarctic.

Methods We reviewed and summarized published biogeographic studies of the Antarctic. We then developed a biogeographic classification for terrestrial con- servation planning in Antarctica by combining the most comprehensive source of Antarctic biodiversity data available with three spatial frameworks: (1) a 200-km grid, (2) a set of areas based on physical parameters known as the environmental domains of Antarctica and (3) expert-defined bioregions. We used these frameworks, or combinations thereof, together with multivariate techniques to identify biologically distinct areas.

Main conclusions Ice-free terrestrial Antarctica comprises several distinct bio- regions that are not fully represented in the current Antarctic Specially Pro- tected Area network. Biosecurity measures between these ACBRs should also be developed to prevent biotic homogenization in the region.