When doing a science talk for a large audience or classroom, have you ever wished for an activity to encourage audience participation and to have fun while learning? If so, this activity may be just what you are looking for. 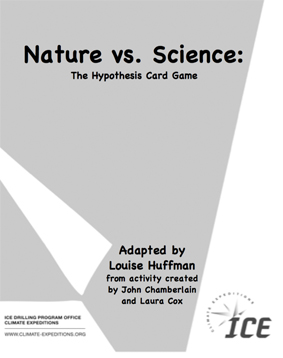 The Nature vs Science Card Game was created to demonstrate the “nature OF science” to non-science audiences. In it’s original form, it is a game that two students play with two sets of cards—one player is a “scientist” and one is “nature.” Nature receives a “law” from the teacher and must always respond to the card played by the Scientist according to that law. The Scientist plays cards one at a time and tries to discover what Nature’s law is by the responses Nature plays. The Scientist can play as many cards as necessary to discover the pattern of the “law.” When he/she thinks they know the law, they test their hypotheses three times at which point they have a “valid theory.”

At the AGU Fall Meeting, this game was successfully tested as a large group activity using animated cards on a large screen. The digital game and all directions are available on the Nature vs Science Hypothesis Card Game web page.

In a large group, the presenter asks the audience to play the role of “Scientist” and to call out patterns that they notice after each time Nature plays a response. Then, the presenter plays the next Scientist card and asks the audience what they think Nature will play in response. They continue playing until they have achieved a valid theory. Nature can never tell what the law is … Nature can’t talk. In reality, the theory stays in effect unless another scientist proves it wrong. In a classroom, Nature and Scientist switch roles and play again.

Students love actually playing the card game, but time can be an issue in large groups and in classrooms. The digital version of the game engages your audience within a lecture and also demonstrates the process of science.