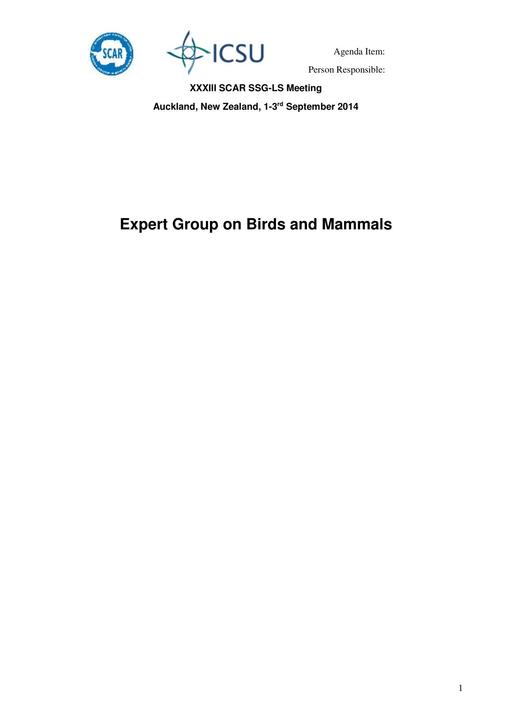 We have a core group of specialists consisting of approximately 12 scientists with on-going research roles in the Southern Ocean, and who would span a range of disciplines, taxa and nationalities. The role of this core group is to facilitate communication and involvement of the wider community of bird and mammal biologists regarding activities of EG-BAMM. One of the exciting prospects of the EG-BAMM is the opportunity to develop new synergies. This is particularly true in the area of ecosystem structure and dynamics, bearing in mind that predators can provide an integrated signal of changes in distribution and abundance of prey. Further, the physical and biological coupling mechanisms can be elucidated in these species, due to our ability to track them accurately, measure relevant life history characteristics, and even collect pertinent biological data at scales relevant to the organism.

Important Issues or Factors: (what do the SCAR Delegates need to be aware of). The Retrospective Analysis of Antarctic Tracking data is progressing well, at least in part thanks to a SCAR Contingency Fund grant. A new EG-BAMM subcommittee on population monitoring which will be part of a consortium incorporating SCAR, CCAMLR and SOOS is being considered and will be discussed further in Auckland. Another EG-BAMM subcommittee is also being considered to deal with the emergence of diseases and parasites infection in top predator populations in relation with the warming of the climate in Antarctica. This subcommittee is currently defining its terms of references and will be discussed in Auckland. Finally, the Biogeographic Atlas, the main output of the Census of Antarctic Marine Life in which EG-BAMM members played a significant role as editors, authors or data contributors, should be finalized – in its paper version – in the coming weeks and will be presented in Auckland.

Recommendations/Actions and Justification: (what actions are you requesting of the Delegates and why they should agree). Continued financial and logistic support for EG-BAMM.

Expected Benefits/Outcomes: (if the actions are taken what outcomes are expected). EG-BAMM will continue engaging with the existing SCAR Biology programs, as well as with CCAMLR, SOOS and Birdlife International. For example we are playing an active role in the SOOS/SCOR Essential Ecological Variables initiative, with several core EG-BAMM members attending the recent meeting at Rutgers University, as well as the SCAR Horizon Scan.

Partners: (will this involve others both within and outside of SCAR?) The main partners on our on-going programs are CCAMLR, SOOS and Birdlife International, as well as the various national Antarctic Programs that continue to support bird and mammal research in the Southern Ocean. We also work with the Antarctic Treaties CEP.

Budget Implications: (What funds are requested or other commitments by SCAR?). We request US$9000 for the next year of EG-BAMMs operation.