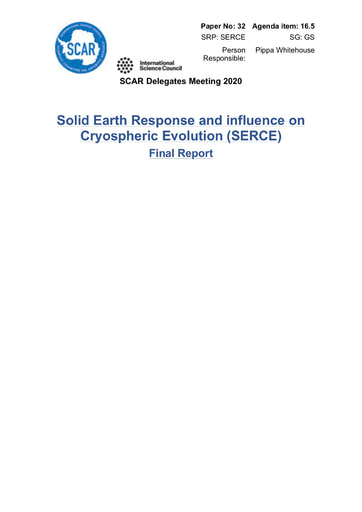 The overarching objective of the Solid Earth Response and influence on Cryospheric Evolution (SERCE) scientific research programme has been to:

Advance understanding of the interactions between the solid earth and the cryosphere to better constrain ice mass balance, ice dynamics and sea-level change in a warming world.

This objective was achieved through integrated analysis and incorporation of geological, geodetic and geophysical measurements into models of glacial isostatic adjustment (GIA) and ice sheet dynamics.

SERCE has been particularly effective at facilitating the development of new communities which have opened new areas of scientific endeavour. The two major community-building achievements are:

These communities have been built through support of Early Career Researchers (ECRs) to travel to SERCE-supported meetings, including workshops and two highly successful GIA training schools which attracted a total of 87 in-person attendees and >100 virtual attendees. About 75% of SERCE funds have supported ECRs.

SERCE has represented its aims through a series of statements regarding scientific priorities. SERCE issued statements directed toward national funding bodies to continue and extend networks of GPS and seismic instruments, and to support the collection of in situ measurements of GHF and bedrock radiogenic heat production. SERCE articulated the need for individual scientists to make seismic and geodetic data freely and openly available within data repositories. SERCE successfully recommended to SCAR that geodetic monuments be maintained, and not removed at the end of individual studies, to enable long-term mm-level monitoring of the crust.

Finally, we would like to note that SERCE has been well supported through the SCAR office and particularly the work of Eoghan and Chandrika most recently. The funding level of $20k/yr has enabled targeted and well considered support and we remain convinced that ECRs in particular have benefited as a result. This is borne out in the testimony we have received from many individual researchers who replied to our call for input to this report.