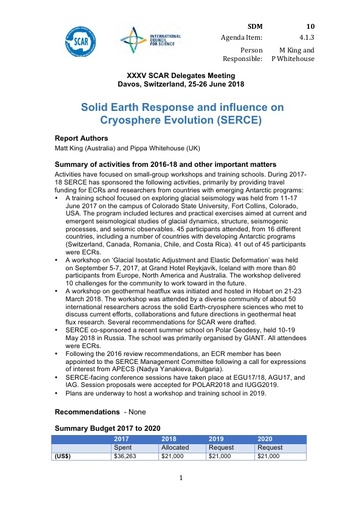 Summary of activities from 2016-18 and other important matters

Activities have focused on small-group workshops and training schools. During 2017-18 SERCE has sponsored the following activities, primarily by providing travel funding for ECRs and researchers from countries with emerging Antarctic programs:

• A training school focused on exploring glacial seismology was held from 11-17 June 2017 on the campus of Colorado State University, Fort Collins, Colorado, USA. The program included lectures and practical exercises aimed at current and emergent seismological studies of glacial dynamics, structure, seismogenic processes, and seismic observables. 45 participants attended, from 16 different countries, including a number of countries with developing Antarctic programs (Switzerland, Canada, Romania, Chile, and Costa Rica). 41 out of 45 participants were ECRs.

• A workshop on ‘Glacial Isostatic Adjustment and Elastic Deformation’was held on September 5-7, 2017, at Grand Hotel Reykjavik, Iceland with more than 80 participants from Europe, North America and Australia. The workshop delivered 10 challenges for the community to work toward in the future.

• A workshop on geothermal heatflux was initiated and hosted in Hobart on 21-23 March 2018. The workshop was attended by a diverse community of about 50 international researchers across the solid Earth-cryosphere sciences who met to discuss current efforts, collaborations and future directions in geothermal heat flux research. Several recommendations for SCAR were drafted.

• SERCE co-sponsored arecentsummer school on Polar Geodesy, held 10-19 May 2018 in Russia. The school was primarily organised by GIANT. All attendees were ECRs.

• Following the 2016 review recommendations, an ECR member has been appointed to the SERCE Management Committee following a call for expressions of interest from APECS (Nadya Yanakieva, Bulgaria).

• SERCE-facing conference sessions have taken place at EGU17/18, AGU17, and IAG. Session proposals were accepted for POLAR2018 and IUGG2019.

• Plans are underway to host a workshop and training school in 2019.