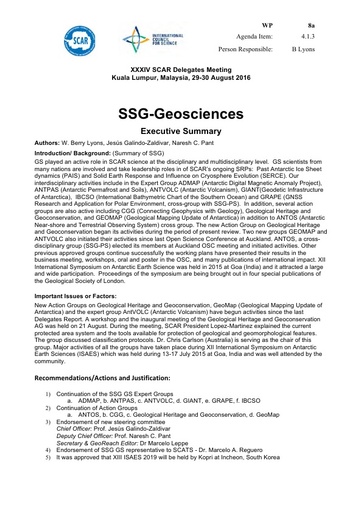 Introduction/ Background: GS played an active role in SCAR science at the disciplinary and multidisciplinary level. GS scientists from many nations are involved and take leadership roles in of SCAR’s ongoing SRPs: Past Antarctic Ice Sheet dynamics (PAIS) and Solid Earth Response and Influence on Cryosphere Evolution (SERCE). Our interdisciplinary activities include in the Expert Group (GNSS Research and Application for Polar Environment) GRAPE. A new Action Group on Geological heritage and Geo- conservation began its activities during the period of present review. Two new groups. GeoMap and AntVOLC also initiated their activities since last Open Science Conference at Auckland. ANTOS, a cross-disciplinary group (SSG-PS) elected its members at Auckland OSC meeting and initiated activities. XII International Symposium on Antarctic Earth Science was held in 2015 at Goa and it attracted a large and wide participation. Proceedings of the symposium are being out in four special publications of the Geological Society of London. ADMAP continued its prolific publications and is seeking an extension to process the newly acquired geophysical data. GNSS-GRAPE attempts to draft a new SRP at Kuala Lumpur. Other groups of GS have also been quite active with a significant scientific output since the last Delegates meeting.

Important Issues or Factors: New Action Groups on Geological Heritage and Geo-conservation, GeoMap (Geological Mapping Update of Antarctica) and AntVOLC (Antarctic Volcanism) have began functioning since the last Delegates Report. Their major activities started during XII International Symposium on Antarctic Earth Sciences (ISAES), which was held during 13-17 July 2015 at Goa, India and was well attended by the community. A workshop and the inaugural meeting of the Geological Heritage and GeoConservation AG was held on 21 August and XX people attended from YY countries. During the meeting, SCAR President Lopez-Martinez explained the current protected area system and the tools available for protection of geological and geomorphological features. The group discussed classification protocols. Chris Carter (Australia) is serving as the chair of this group and steering committee.

Expected Benefits/Outcomes: This Action Group will provide the expertise to better classify and identify important geological and geomorphological features in Antarctica

Budget Implications: Current needs are similar to other AGs within GS-SSG