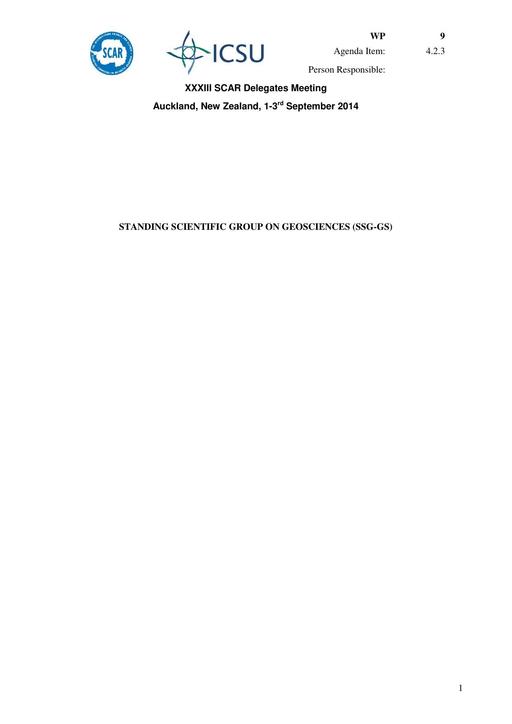 GS continues to play a role in SCAR science both at the disciplinary and multidisciplinary level. GS scientists from many nations are involved and take leadership roles in two of SCAR’s ongoing SRPs: Past Antarctic Ice Sheet dynamics (PAIS) and Solid Earth Response and Influence on Cryosphere Evolution (SERCE). Our interdisciplinary activities include in the Expert Group (GNSS Research and Application for Polar Environment) GRAPE. Demo GRAPE, an initiative of GRAPE, will begin within the next months involving new contributions from South Africa and Brazil to the original program. ADMAP continues to be a productive program as a special issue of the journal Tectonophysics comprised sixteen papers updating ADMAP’s contributions to geomagnetic studies of the Antarctic regions. ANTPAS also continues to produce important scientific results including an overview of permafrost conditions in the Antarctic Peninsula and an inventory of paleoclimatic records from the McMurdo Dry Valleys. A special issue of the journal Geomorphology is currently being prepared for publication. Also the GIANT, IBCSO and CGG groups have relevant results. New activities include the development of a Geo-Heritage action group that will aid in helping to develop criteria for the protection of special geological features in the Antarctica. The Antarctic volcanism expert group also will aim to study different aspects and interactions of volcanic activity. The geological mapping update of the Antarctica will be focused in the integration of all the available geological data, mainly in Transantarctic mountains. The XII International Symposium on Antarctic Earth Sciences (ISAES) is currently being planned for the summer of 2015 in Goa, India. Proceedings of the symposium are likely to be published by the Geological Society of London in their Special Publication Series.

Important Issues or Factors:
A new observing system is being proposed “Antarctic Near-Shore and Terrestrial Observing Systems” –ANTOS. This is an interdisciplinary program that will involve all three SSGs.

New Expert Groups and Action Group have been proposed following the ideas emerging from Horizon Scan.

Budget Implications: Current budget needs are expected to be similar for the existing scientific groups within GS-SSC