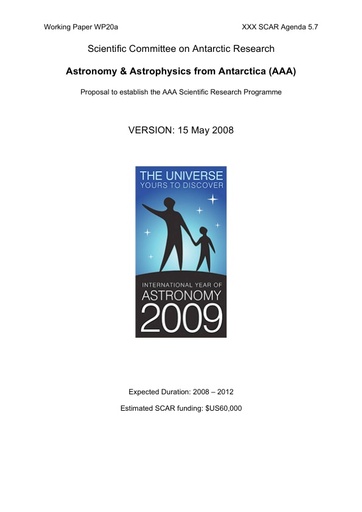 Working Paper 20a
Agenda Item: 5.7
Posted/Revised: May 1
Person Responsible: COs

Astronomy from the Antarctic came of age in the last decade with a cosmological result of major significance. Balloon-borne millimetre observations of the cosmic microwave background from the first BOOMERANG flight led directly to the discovery of the zero- curvature Universe. Submillimetre astronomy has also prospered in the Antarctic: the South Pole Telescope is expected to probe the nature of “dark energy”, the biggest constituent of a “flat” Universe. Optical and infrared astronomy can define the “equation of state” of the Universe, probe the interior structures of stars (including the sun) using time-domain astrophysics, and search for new planetary systems, while particle astronomy answers fundamental questions about the nature of the Universe.

Astronomy & Astrophysics from Antarctica will facilitate international astronomical programs in Antarctica. These programs are aimed at understanding the overarching ecological processes in the Universe, from the birth of stars and of planetary systems around other stars, to the return of heavy-element enriched materials to the interstellar medium, and the formation of new molecular clouds.

Astronomy & Astrophysics from Antarctica will add value by fostering international collaboration in order to permit goals to be achieved that are beyond those of single national programs. Some themes for AAA will be site-testing and validation (including potential new sites in the Arctic), organization of scientific goals that involve a multi-wavelength approach and hence multiple facilities, creation of a roadmap for major facilities, and stimulation of international cooperation in the development of these facilities. Cross-disciplinary links outside astronomy will also be forged.

A strong AAA program will also strengthen the accomplishments of SCAR, which exists to promote frontier science driven coordination and collaboration. SCAR can enhance the scientific value of Antarctic astronomy by moving to establish the AAA Scientific Research Programme at this time. The benefits of coordination and international collaboration will be keenly felt.