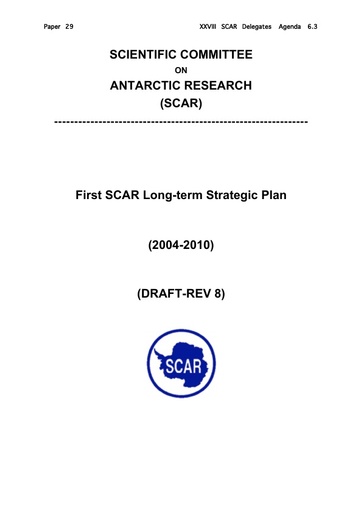 The future beckons, and SCAR needs to choose what directions to take to ensure that it continues to make a significant impact on scientific research in the Antarctic region. SCAR’s mission as redefined in this document is “to be the leading edge independent organisation for facilitating and coordinating research in Antarctica, and identifying issues emerging from greater scientific understanding that should be brought to the attention of policy makers”. In order to better achieve that mission SCAR has recently made a number of structural changes in response to the recommendations of a major Review in the year 2000. As one of the environmental bodies of the International Council for Science (ICSU), SCAR also had to address the new requirements for such bodies that were first promulgated by ICSU in February 2004 (Annex 2). And, looking ahead to the medium term, SCAR had to consider the nature of its role in a major international event - the proposed International Polar Year (IPY) 2007-2008. A document was needed to set out the way in which SCAR has responded or proposes to respond to these various new requirements, and to provide a roadmap for the future.

The Long Term Strategic Plan for 2004-2010 is that document. It looks across three biennial planning cycles. It continues the emphasis on making SCAR more proactive; improving the planning and decision making functions during the biennial SCAR cycle; modernising SCAR’s secretariat; implementing change rapidly to maintain and enhance SCAR’s position as the authoritative international leader for scientific research in Antarctica; and engaging with national Antarctic committees and other adhering bodies to renew their commitments to SCAR. The Plan will be revisited at each biennial meeting of the SCAR Delegates, and revised as appropriate.

When approved by Delegates, the Strategic Plan will be converted into an Implementation Plan with time lines. The work programme and budget that the Delegates approve at SCAR XXVIII will be the short-term component of the Implementation Plan for the first 2 years of the period covered by the Plan.

The Plan sets out where SCAR fits in the world of science by defining SCAR’s Vision and Mission. The Plan meets the Review’s recommendations to broaden SCAR’s mission, and ICSU’s requirements, by establishing the following five Main Objectives:

The first two of these objectives are modifications of the three objectives defined in the previous SCAR Constitution. The three new ones are responses to proposals made by the 2000 Review of SCAR, and by ICSU in 2004. Achieving these objectives will enhance SCAR’s role as ICSU’s authoritative voice on the state and development of science in the Antarctic region.

Underpinning these major objectives, and contributing to their success are two Cross Cutting Objectives: (6) to improve the effectiveness, efficiency and flexibility of the structure, working mechanisms and practices of SCAR; and (7) to increase funding to match requirements, and to maintain a healthy funding stream.

The Strategic Plan recommends that SCAR should play a primary role in the implementation of the proposed IPY, supporting and, where appropriate, leading the implementation of the Antarctic elements of the IPY Science Plan. The Strategic Plan calls for creation of a SCAR IPY Committee to work in consultation with the Council of Managers of National Antarctic Programmes (COMNAP) to advise the SCAR Executive Committee on the IPY Science and Implementation Plans, on the potential roles of SCAR in the IPY structure and process, and on progress in involving SCAR in IPY activities.

The Strategic Plan supports the focus of SCAR’s efforts on a small number of major Scientific Research Programmes. It calls on SCAR scientists to maintain, strengthen and diversify links with other ICSU bodies. It requires the Standing Scientific Groups (SSGs) to consider, in their planning, the contribution of Antarctic science to global issues, and the effects of global processes on the Antarctic region. It requests SSGs to consider the needs of global monitoring programmes for long-term measurements. It calls for SCAR, in partnership with the space agencies and others, to lead the development of a major international and bi- polar Cryosphere Theme to create a framework for improved coordination of cryospheric observations derived from scientific research, long-term scientific monitoring, and operational programmes. And it suggests a closer cooperation on scientific matters in future with the International Arctic Science Council (IASC).

Over the 6-year period covered by the Strategic Plan, SCAR will:

To ensure that SCAR continues to operate to high standards, the Plan calls for SCAR’s performance to be reviewed by an independent group at intervals of 8 years, with the next review being in 2008.

The effects of inflation since 1995, when the membership subscription was last raised, have been to reduce the value of the SCAR contributions by $77000 per year in 2004. An increase of funding to the 1995 level of activity is therefore required if SCAR is to be able to support an appropriate number of major Scientific Research Programmes.

In addition, the costs associated with hiring an Executive Director to meet the requirements of the SCAR Review amount to an additional $85000 per year. These costs are currently being met by draining the cash reserve, which cannot be continued for long. Additional funds are required if SCAR is to continue to benefit from the work of an Executive Director.

It is clear from the experience of other similar organisations that much more could be done to attract extra contributions from a few specific agencies towards specific targeted activities. Such funds are much more likely to be available from national agencies than private foundations. However they are more likely to be granted for the support of specific scientific programmes than to support administrative costs.

This analysis suggests that a significant rise in the membership subscription is warranted to cover the costs of maintaining the Secretariat at its present size. That rise should also be large enough to cover all or some of the shortfall in science funding since 1995. The combined shortfall amounts to $160,000/year. Options for redressing the balance will be presented to the XXVIII SCAR Delegates in a Financial Strategy paper.

Delegates can play a key role in aiding the Secretariat to seek new resources. The Terms of Reference of the Standing Committee on Finance could be modified to require it (in addition to other functions): “to provide advice to the Delegates and, inter-sessionally to the Executive Committee and Secretariat, on potential funding sources for specific SCAR activities”. Advice on external resources could be obtained from an ad hoc Task Team on Resources, reporting to the Finance Committee, and comprising agency experts having wide knowledge of potential funding sources.