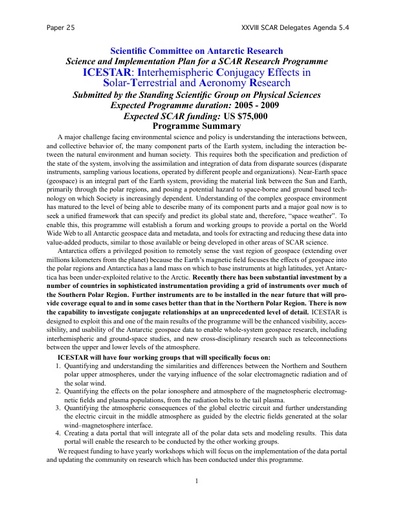 A major challenge facing environmental science and policy is understanding the interactions between, and collective behavior of, the many component parts of the Earth system, including the interaction be- tween the natural environment and human society. This requires both the specification and prediction of the state of the system, involving the assimilation and integration of data from disparate sources (disparate instruments, sampling various locations, operated by different people and organizations). Near-Earth space (geospace) is an integral part of the Earth system, providing the material link between the Sun and Earth, primarily through the polar regions, and posing a potential hazard to space-borne and ground based tech- nology on which Society is increasingly dependent. Understanding of the complex geospace environment has matured to the level of being able to describe many of its component parts and a major goal now is to seek a unified framework that can specify and predict its global state and, therefore, “space weather”. To enable this, this programme will establish a forum and working groups to provide a portal on the World Wide Web to all Antarctic geospace data and metadata, and tools for extracting and reducing these data into value-added products, similar to those available or being developed in other areas of SCAR science.

Antarctica offers a privileged position to remotely sense the vast region of geospace (extending over millions kilometers from the planet) because the Earth’s magnetic field focuses the effects of geospace into the polar regions and Antarctica has a land mass on which to base instruments at high latitudes, yet Antarc- tica has been under-exploited relative to the Arctic. Recently there has been substantial investment by a number of countries in sophisticated instrumentation providing a grid of instruments over much of the Southern Polar Region. Further instruments are to be installed in the near future that will pro- vide coverage equal to and in some cases better than that in the Northern Polar Region. There is now the capability to investigate conjugate relationships at an unprecedented level of detail. ICESTAR is designed to exploit this and one of the main results of the programme will be the enhanced visibility, acces- sibility, and usability of the Antarctic geospace data to enable whole-system geospace research, including interhemispheric and ground-space studies, and new cross-disciplinary research such as teleconnections between the upper and lower levels of the atmosphere.

ICESTAR will have four working groups that will specifically focus on:

We request funding to have yearly workshops which will focus on the implementation of the data portal and updating the community on research which has been conducted under this programme.