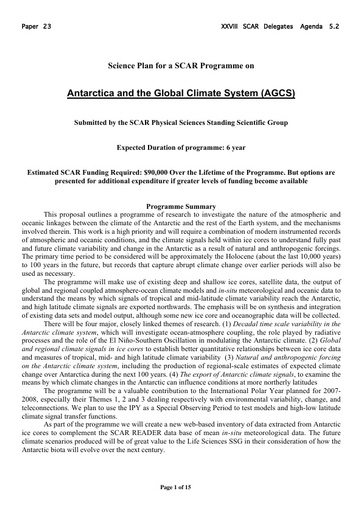 This proposal outlines a programme of research to investigate the nature of the atmospheric and oceanic linkages between the climate of the Antarctic and the rest of the Earth system, and the mechanisms involved therein. This work is a high priority and will require a combination of modern instrumented records of atmospheric and oceanic conditions, and the climate signals held within ice cores to understand fully past and future climate variability and change in the Antarctic as a result of natural and anthropogenic forcings. The primary time period to be considered will be approximately the Holocene (about the last 10,000 years) to 100 years in the future, but records that capture abrupt climate change over earlier periods will also be used as necessary.

The programme will make use of existing deep and shallow ice cores, satellite data, the output of global and regional coupled atmosphere-ocean climate models and in-situ meteorological and oceanic data to understand the means by which signals of tropical and mid-latitude climate variability reach the Antarctic, and high latitude climate signals are exported northwards. The emphasis will be on synthesis and integration of existing data sets and model output, although some new ice core and oceanographic data will be collected.

The programme will be a valuable contribution to the International Polar Year planned for 2007- 2008, especially their Themes 1, 2 and 3 dealing respectively with environmental variability, change, and teleconnections. We plan to use the IPY as a Special Observing Period to test models and high-low latitude climate signal transfer functions.

As part of the programme we will create a new web-based inventory of data extracted from Antarctic ice cores to complement the SCAR READER data base of mean in-situ meteorological data. The future climate scenarios produced will be of great value to the Life Sciences SSG in their consideration of how the Antarctic biota will evolve over the next century.