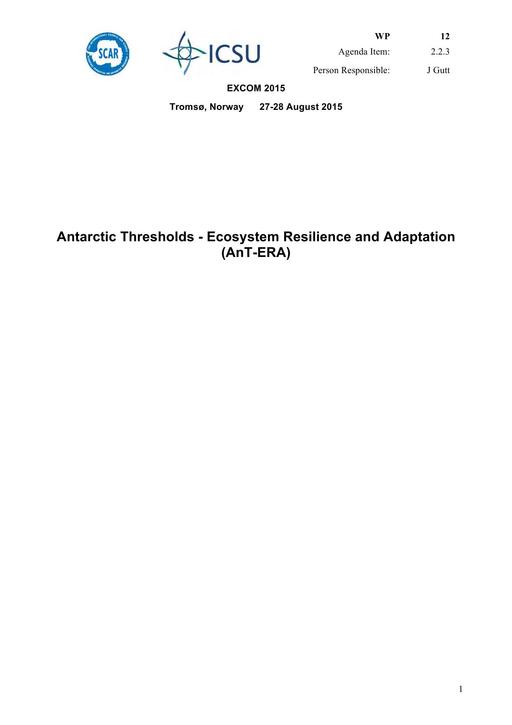 Introduction/ Background: The successful preparatory phase of the program in 2013 provided a basis for major activities, carried out in the past 12 months. Following our implementation plan we concentrated on the dissemination of scientific results, support of research projects and early career scientist as well as conceptual preparation of future research initiatives.

Important Issues or Factors: (1) Contributions to 3 international scientific meetings: (a) SCAR Horizon Scan in Queensland, NZ, (b) SCAR Open Science Conference in Auckland, NZ, (c) AnT-ERA workshop on "Molecular and genetic advances to understanding evolution and biodiversity in the polar regions" in Napoli, IT. The events provided an excellent opportunity for AnT-ERA scientists to communicate with each other and with other initiatives and key global science leaders to shape important research activities in the next years. (2) Support of early career scientists was implemented providing mini-grants, to participate in symposia, workshops and conferences but also for working stays in other labs to extend their experience and support of an APECS / AnT-ERA workshop in Hannover, Germany. (3) Review-paper (Gutt et al. 2015) provided a new analytic approach of climate-change induced multiple threads of Antarctic marine ecosystems published as a product of AnT-ERA topics 2 & 3 in close cooperation with ACCE and AntClim21. (4) When new "Scientific Highlights" (popular outreach articles) on AnT-ERA's homepage are announced through AnT-ERA's mailing list, approx. 90% of the approx. 500 mailing list members visit this homepage.

Recommendations/Actions and Justification: AnT-ERA's SC members are active in their participation and support of research on biological processes in the Antarctic, mainly affected by climate change. Much emphasis has been placed on studying tipping points and the resilience of species and ecosystems, issues of rising importance to the global science community. AnT-ERA contributes successfully to cooperation between single research activities, which require international coordination to achieve the overarching aim of improved understanding of ecosystem functioning. The quality of AnT-ERA's activities depends on both, bringing together the best scientists in their research fields and including as many national programs as possible. In this respect we depend on the support not only of the SCAR secretariat but also of the national programs, represented in the SCAR Standing Scientific Group of Life Sciences to the benefit of both, the AnT-ERA community within SCAR and the national programs. Besides such general scientific communication we focus on the dissemination of scientific concepts and results.

Expected Benefits/Outcomes: The main targeted outcome of AnT-ERA in 2015 will be the results of the Cross-program workshop under the leadership of AnT-ERA SC members (Gutt& Isla). We expect to improve interdisciplinary cooperation between Antarctic physicists and biologists, which should attract national and international funding especially for early career scientists.

Partners: We will continue and intensify existing cooperation with AntEco, AntClim21 and ICED. AnT-ERA has been linked with SCAR-EGBAMM internally, PEI (Polar Educators International) and we sponsored the APECS workshop in Hannover. AnT-ERA contributes to EU-PolarNet.

Budget Implications: We appreciate the support of the SCAR secretariat and hope to receive the same budget for the next financial period, which provides a valuable basis for our mission to coordinate, disseminate and communicate research activities, results and experience.