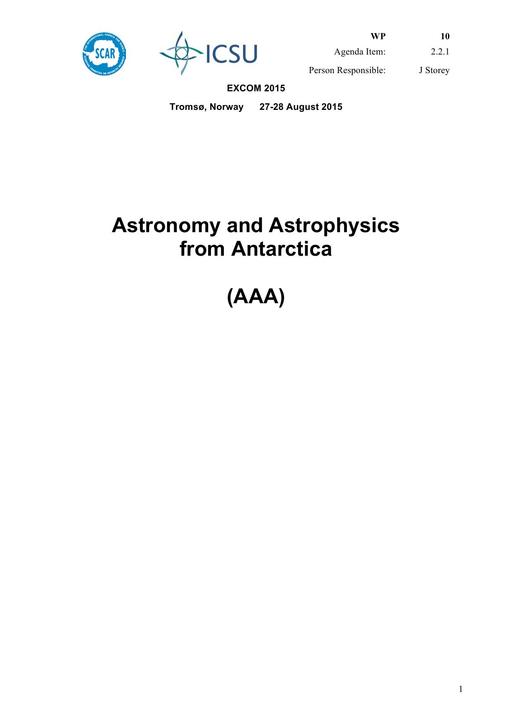 Introduction/Background: Broadly stated, the objectives of Astronomy & Astrophysics from Antarctica (AAA) are to coordinate astronomical activities in Antarctica in a way that ensures the best possible outcomes from international investment in Antarctic astronomy, and maximizes the opportunities for productive interaction with other disciplines.

Important Issues or Factors: At this stage, AAA is functioning well, with no significant problems. We have recently replaced roughly half of our Steering Committee members as part of a planned rotation, and will replace the remainder in 2016.

Recommendations/Actions and Justification: None requested.

Expected Benefits/Outcomes: Based on the recommendations of the 2014 external review, AAA is placing a greater emphasis in future on outreach and education, both to the general community and to SCAR member countries with less developed astronomical programs. AAA has also organised an exhibition booth for the two-week duration of the upcoming international Astronomical Union (IAU) meeting in Honolulu. This booth will be staffed by volunteers, and aims to raise the profile of both SCAR and Antarctic astronomy within the broader astronomical community.

Partners: No formal partners, although the International Astronomical Union (IAU) is a Union Member of SCAR.

Budget Implications: Continuing funding is requested at the approved level.