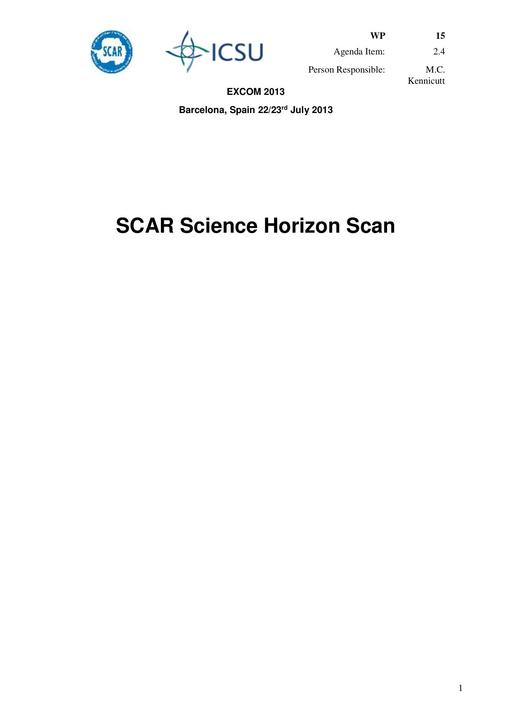 At the 2012 SCAR Delegates Meeting it was agreed that an Action Group (AG) be formed to begin planning for an Antarctic and Southern Ocean Science Horizon Scan (SHS). The rationale for the AG and Terms of Reference are detailed in XXXII SCAR Delegates’ Meeting Working Paper 28b. The membership of the AG was agreed and the first meeting of the Action Group was held at the SCAR Secretariat in Cambridge, UK from December 19-21, 2012. A detailed meeting report is available. The first meeting included opportunities for community consultation by on-line questionnaire, personal appearances, and electronic discussions via Skype.

The aim of the Science Horizon Scan (SHS) is to convene a representative subset of leading scientists and professionals to identify the most important, emerging scientific themes for research to be conducted in and from Antarctica and the Southern Ocean over the next two decades.  The SCAR 2011-2016 Strategic Plan calls for initiation of a “Horizon Scanning” activity to be held every 4 or 5 years. To support SCAR’s mission of leadership in Antarctic and Southern Ocean science and assist in future strategic planning. The SHS is also a community-building exercise. From SCAR’s Strategic Plan:

“To sustain a position of leadership, SCAR must maintain a continually evolving vision of frontiers and emerging directions in Antarctic and Southern Ocean science. To this end, SCAR will sponsor a regular assessment of scientific frontiers. The objective will be to assemble the world’s leading experts to scan the horizons for emerging frontiers in Antarctic and Southern Ocean science and identify gaps in knowledge. This gathering will draw on data and information from SCAR conferences, symposia, workshops, meetings and other scientific gatherings; the outcomes of SCAR’s Action, Expert and Program Planning Groups; National Antarctic Program planning and strategic documents; outcomes of SCAR’s Scientific Research Programs; and reports of SCAR’s Cross-linkages Meetings. The assessment will produce a 5- and 10- year vision of future directions and grand challenges in Antarctic science. These assessments will inform SCAR leadership and members as it evaluates its scientific portfolio, concludes programs and approves new ones.”

The definition of Antarctica and the Southern Ocean historically adopted by SCAR is used:

In parallel, complementary activities are underway that are addressing SCAR’s scientific advisory mission - the Antarctic Conservation Strategy (ACS) and the Antarctic Environments Portal (AEP) projects. The Science Horizon Scan (SHS) focuses on future directions and emerging frontiers in pure/basic science. The ACS and AEP focus on providing access to policy-ready science. All three of these activities are mutually beneficial and synergistic but each has its own independent timeline, goals, leadership, and processes. This report summarizes progress on organizing and funding the Science Horizon Scan is summarized.