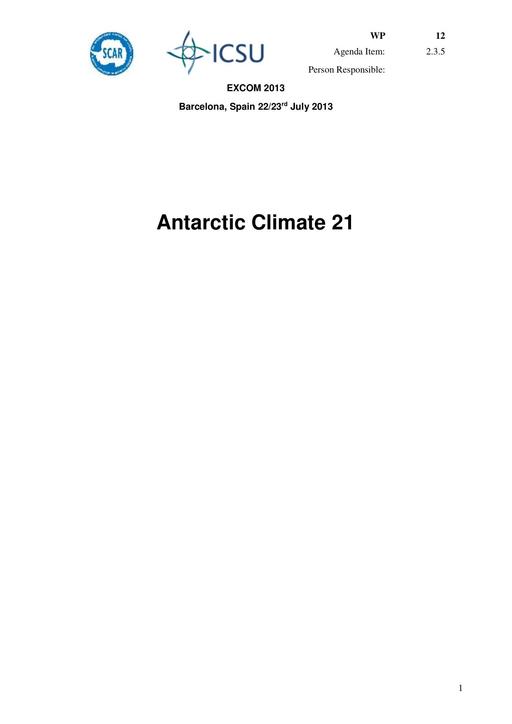 Climate model simulations predict that over the coming decades there will be declining sea ice extent, weakening bottom water formation, and an intensification of the zonal winds. Observations confirm ice shelf collapse, strengthening zonal winds, a rapid increase in net contribution to sea level rise in particular from West Antarctica, substantial warming of the mid troposphere over Antarctica, and rapid warming of the Antarctic Peninsula and sub-Antarctic Islands, an increase in temperature and acidification of the Southern Ocean, regional decrease and increase in sea ice, a freshening of the Ross Sea, and a decrease of bottom water formation. However, these time series are short and inter-model variability suggests physical processes are not yet fully captured or understood.

Paleoclimate records extend observational data for past climates that provide relevant analogues to future projections. The comparison of model performance with known past climate variability provides an important tool for validation of models and their ability to provide future projections. For recent decades both observational data from Antarctic stations and satellite systems have allowed reconstruction of modern climate conditions, in particular the establishment of meaningful reanalysis data sets, such as NCEP/NCAR, ERA-40, ERA-interim, Merra, CFSR, and JRA-55 data sets. The improved re-analysis data sets allow for the development of transfer functions to convert proxy data into quantitative climate records.

To reconstruct and understand climate and ocean variability with a frequency longer than seasonal to sub-decadal or to use past analogues of future climate conditions, paleoclimate archives provide critical information. In the Antarctic region, such records are principally derived from ice and marine sediment cores, and some terrestrial records from small pockets of ice-free areas. We will focus primarily on the reconstruction of the past 2,000 years, where the availability of high resolution (annual to sub-decadal) climate proxy records will allow us to extent observational data with near instrumental quality. In addition, we will take advantage of records and model outputs of earlier key periods as they may become available, in particular the mid-Holocene, glacial terminations, warm interglacials, and the mid-Pliocene.

Well dated, high resolution proxy data reconstruction will help to improve our understanding of natural climate variability, climate drivers, the onset and quantification of recent trends that are poorly captured in current climate models. Furthermore, we will utilise these records to provide data for climate model verification. In addition to published work, we will synthesise data and results from existing initiatives to reconstruct high resolution climate data sets, such as the International Trans-Antarctic Scientific Expedition (ITASE) and the 2,000 year array of the International Partnerships on Ice Coring Sciences (IPICS).

Reconstruction of time periods representing substantial climate transitions (for example the Medieval Warm Period – Little Ice Age, and potentially the mid-Holocene, and glacial terminations) provide an opportunity to investigate the magnitude of responses, feedback mechanisms, and model sensitivity to these drivers. Model outputs of past warm climates (Medieval Warm Period, and potentially Marine Isotope Stage 5 & 11, the mid-Pliocene) are useful analogues for possible futures. In Table 1, atmospheric carbon dioxide concentration and changes in temperature are summarised for these time periods:

There are three important components involved in simulating future environmental changes, namely forcing scenarios, physical models, and biological models. Forcing scenarios are storylines of possible futures which cover a wide range of plausible anthropogenic emissions pathways. These depend on factors such as economic development, adoption of renewable energy and land use. In preparation for the upcoming IPCC AR5 a set of scenarios were produced. These comprises four Representative Concentration Pathways (RCPs), RCP2.6, RCP4.5, RCP6 and RCP8.5 (where the numbers represent the approximate change in radiative forcing in W/m2). RCP4.5 represents a “medium” mitigation scenario and RCP8.5 is a “high” emissions scenario. In addition to the new future scenarios, the IPCC has defined a set of baseline paleoclimate simulations. Paleoclimate simulations were not defined as part of the AR4 modelling effort and this represents one of the most significant new components in AR5. The paleoclimate simulations are designed to assess the response and performance of models under forcing conditions that differ significantly from the present day. The IPCC define three different run types: the Last Millennium (850-1850), the Mid-Holocene (6kyr BP), and the Last Glacial Maximum (18 kyr BP).

The physical models used for assessing future climate change vary in complexity. Most of the current generation of physical models are climate “simulators” in the sense that they attempt to represent the observed background climate as realistically as is practical (in this document the term climate model is used in reference to those that fall into this climate simulator category). The climate models that have been run for AR5 fit into this category and are global in scale. These mathematical representations of the atmosphere, ocean, ice and land surface use a large amount of computing resources and are therefore limited in spatial resolution.

The horizontal grid spacing in global climate models is generally in the range 100 km to 200 km in the atmosphere and around 50 km in the ocean. Regional climate models are used to “downscale” the low resolution data of global climate models to be more realistic at smaller grid sizes, which can be of particular importance in regions of steep mountains and complex coastlines such as the Antarctic Peninsula. Global climate models are also generally limited in their representation of ice sheets. In particular they do not represent the flow of glaciers and ice streams, which are a potentially important factor in future sea level change. Currently there is a large amount of work being carried out to address this issue by using regional climate models to force ice sheet models in regions of potentially large impact such as the Pine Island Glacier.

A key aspect of producing reliable projections of future climate is the assessment of skill of the models. Model skill was not assessed rigorously in AR4 with regard to Antarctic climate and this may continue with AR5 as more attention is likely to be directed towards the Arctic. Therefore it is unlikely that the IPCC report alone will provide the detailed best estimates of Antarctic climate change that are required by the SCAR community.

The new paleoclimate runs that are being made available as part of AR5 (and were not available as part of AR4) will provide an exciting opportunity to assess climate model and earth system simulations of a wide range of climatic conditions. This will facilitate a new possibility to assess models’ ability to capture responses to changes in orbital forcing and greenhouse gas concentrations. In addition to responses to “external” forcings, these longer-term runs will provide an opportunity to assess the ability of the models to reproduce climate variability, which is important for assessing the significance of changes over the 20th and 21st centuries.

Assessment of the ecosystem impacts of climate change requires output from the physical models on how key parameters are expected to change. For large-scale studies of the Southern Ocean the direct output from global climate models is adequate. However, for terrestrial, marine and benthic studies along coastlines, fjords and valleys downscaling of the climate model output is required. This is a challenging area of Antarctic research that is in its infancy and requires significant multidisciplinary collaboration in the future. This initiative will collaborate with AntEco and Ant-ERA to synthesise advances made.

The composition of the Steering Committee is characterized by an excellent range of scientific expertise. However, our national representation is rather limited. We are in the process of inviting and recruiting representatives from developing countries and new Antarctic nations to join the steering committee.

We believe that this proposed programme will strengthen SCAR’s position as the leading authority on Antarctic climate change and its local and global impacts. Antarctica and the Southern Ocean do not have a high enough profile in IPCC, and SCAR is well placed to provide the detailed assessment that is required by policymakers and the broader scientific community.

Important partners of AntarcticClimate21 include: Ant-ERA, AntEco, ISMASS, PAIS, SOOS,. Relevant representatives of these groups have been identified. We are in negotiation with Ant-ERA on a combined mini-symposium and/or workshop. Outside SCAR we will engage in particular with IPICS, PAGES, ITASE, and the Arctic research community.

A total of $24k ($20k + $4k of contingency funds) of SCAR funding are committed. No additional funds are requested.