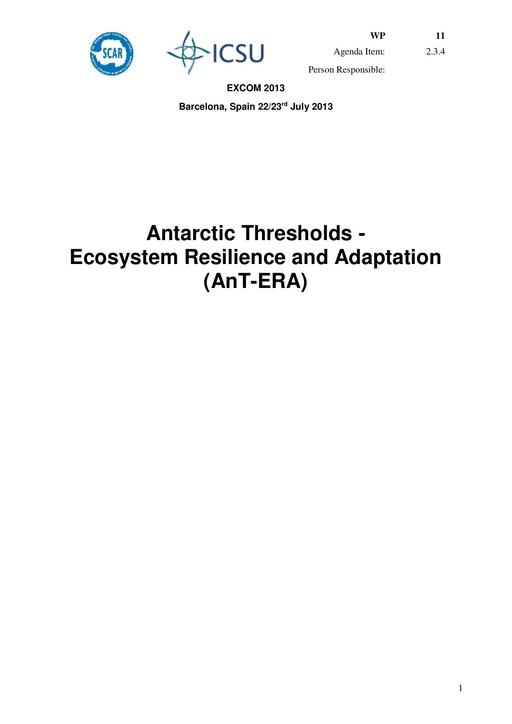 Stresses on Antarctic ecosystems result from global climate change, including extreme events, and from other human impacts. Consequently, Antarctic ecosystems are changing, some at a rapid pace while others are relatively stable. A cascade of responses from molecular through organismic to the community level are expected.

The differences in biological complexity and evolutionary histories between the polar regions and the rest of the planet suggest that stresses on polar ecosystem function may have fundamentally different outcomes from those at lower latitudes. Polar ecosystem processes are therefore key to informing wider ecological debate about the nature of stability and potential changes across the biosphere.

The main goal of AnT-ERA is to facilitate the science required to examine changes in biological processes, from the molecular to the ecosystem level, in Antarctic and Sub-Antarctic marine, freshwater and terrestrial ecosystems. Tolerance limits as well as thresholds, resistance and resilience to environmental change will be determined.

As a SCAR program AnT-ERA lives from the contributions of the scientific community, the national programs and closely linked third party funded projects. Thus, we need full support in promoting AnT-ERA through the SCAR Delegates.

Exchange of experience and ideas within a truly global scientific community.

Exchange of experience and ideas independent of competition for research funds.

Communication between and coordination of research activities including trans-disciplinary projects.

Action recommendations especially in the context of natural variability and anthropogenic environmental change.

Presentation of results to the broader scientific community.

Leading of, and participating in, major workshops, which support both the development of long-term observation networks (weather, ocean, lakes and streams or terrestrial) and an integration of ecological information into interdisciplinary models.

The following events mark potential milestones in communication within the AnT-ERA community and will provide a platform for exchange with a broader scientific world:

2015      AnT-ERA workshop: capacity building to train the next generation of specialists for biological process studies

2017      Meeting to structure and draft reviews for each scientific level