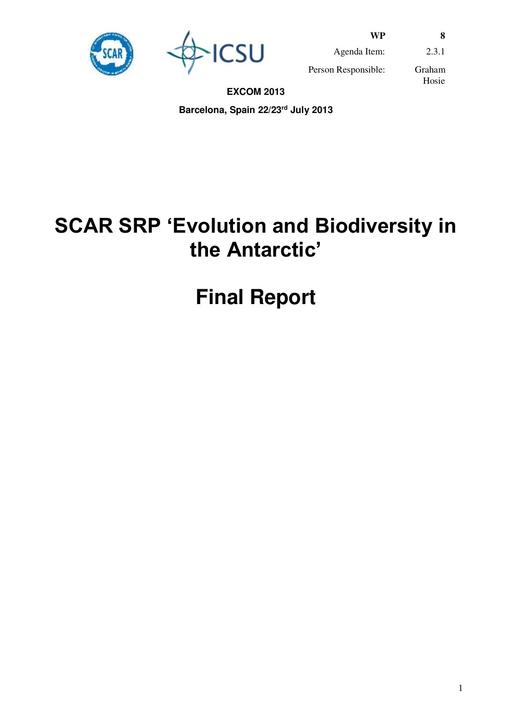 SCAR EXCOM 2013 WP08: Final Report of EBA (Evolution and Biodiversity in the Antarctic)

Title: SCAR SRP ‘Evolution and Biodiversity in the Antarctic’

Relevant URLs or references to other reports: www.eba.aq

Introduction/Background: EBA is the last of the previous portfolio of SCAR SRPs to complete it cycle, ACE and AGSC winding up in 2012. Over that cycle it was the only SCAR programme representing the interests of the very large and diverse biological sciences research community with interests in Antarctica. With the development and adoption of two new biological SRPs by Delegates in 2012, the leaders of EBA agreed to wind up the programme a year earlier than planned originally, not requesting funds for 2013, although extending the time period for use of its existing 2012 funds, not least to take advantage of the 2013 SCAR Biology Symposium (Barcelona) as a timely and high profile ‘wind up’ event for the programme. Work under the auspices of EBA is divided into five ‘workpackages’, each working in both the marine and terrestrial environments of Antarctica.

Important Issues or Factors: Since the Programme’s last Report to Delegates, it has continued to be very active in its primary coordination role, and in science areas previously noted to Delegates; in particular the programme has contributed to the development of robust scientific advice central to informing the CEP and hence ATCM on issues relating to human impacts on the ecosystems of Antarctica, and conservation planning and governance issues. In its final year of active operation the programme members and leaders (1) deliver a themed mini-symposium documenting the ‘state of the art’ and major future challenges in the programme’s science fields at the 2012 SCAR OSC; (2) completed the delivery of planned research workshops or meetings in the remainder of 2012; (3) played an active and central role in the transition to successor SCAR biological and cross- disciplinary research programmes; and (4) used remaining EBA funds as seed money to contribute to specific workshops in this transitional period, in particular to a series of workshops setting the ground for the proposed ANTOS (Antarctic Nearshore and Terrestrial Observing System) activity, contributing to a joint workshop with AnT-ERA on “omics”, and contributing with SSG-LS to an international penguin biology workshop strongly slanted towards the early career scientist community.

Recommendations/Actions and Justification: To note and approve of EBA actions and progress to the end of its formal life cycle.

Expected Benefits/Outcomes: Continued significant publication output (both content and numbers), outreach delivery, advice to stakeholders, enhancement of SCAR profile. Although these direct functions will now be taken over by the new biological SRPs, EBA outputs will clearly continue to enter the public domain, while the legacy of the programme is also the foundation it provides for the new SRPs

Budget Implications: No further budgetary or other approval is required for EBA itself.