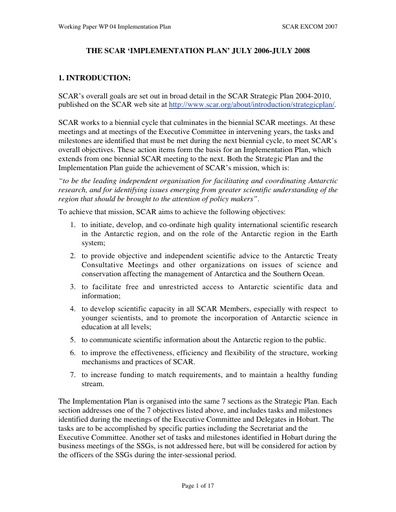 SCAR’s overall goals are set out in broad detail in the SCAR Strategic Plan 2004-2010, published on the SCAR web site at: https://www.scar.org/horizon/strategic-plans/ (updated link)

SCAR works to a biennial cycle that culminates in the biennial SCAR meetings. At these meetings and at meetings of the Executive Committee in intervening years, the tasks and milestones are identified that must be met during the next biennial cycle, to meet SCAR’s overall objectives. These action items form the basis for an Implementation Plan, which extends from one biennial SCAR meeting to the next. Both the Strategic Plan and the Implementation Plan guide the achievement of SCAR’s mission, which is:

“to be the leading independent organisation for facilitating and coordinating Antarctic research, and for identifying issues emerging from greater scientific understanding of the region that should be brought to the attention of policy makers”.

To achieve that mission, SCAR aims to achieve the following objectives:

The Implementation Plan is organised into the same 7 sections as the Strategic Plan. Each section addresses one of the 7 objectives listed above, and includes tasks and milestones identified during the meetings of the Executive Committee and Delegates in Hobart. The tasks are to be accomplished by specific parties including the Secretariat and the Executive Committee. Another set of tasks and milestones identified in Hobart during the business meetings of the SSGs, is not addressed here, but will be considered for action by the officers of the SSGs during the inter-sessional period.