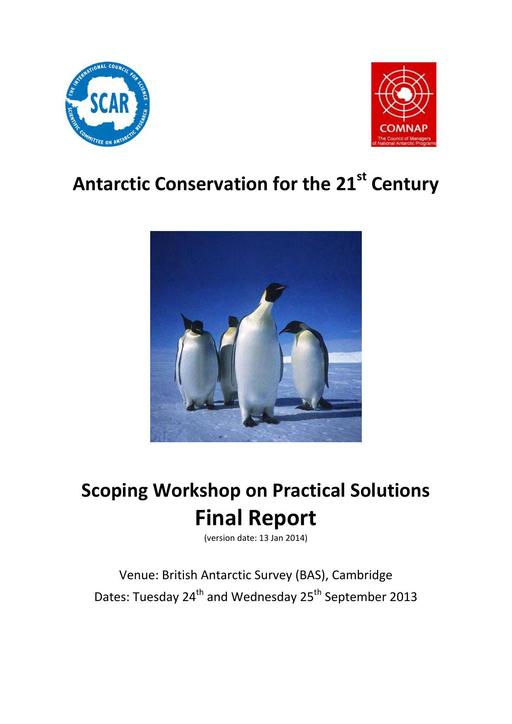 A workshop, held at the British Antarctic Survey, Cambridge (24‐25 September 2013), was convened jointly by COMNAP and SCAR to identify practical national Antarctic programme‐led responses to short and longer‐term conservation challenges in Antarctica (as identified by Chown et al., 2012). The outcomes of the workshop were to inform the drafting by SCAR of an Antarctic Conservation Strategy, the aim of which is to produce a more integrated, comprehensive and dynamic approach to conservation in the region and to inform conservation decision‐making and policy.

It was clear that some Antarctic conservation challenges, such as climate change impacts in marine and terrestrial environments, ocean acidification and pollution from global sources, could not be addressed by action within the Antarctic region alone. Nevertheless, Antarctic scientists could usefully undertake important monitoring and research to inform the global debate on these issues and, where appropriate and practical, show leadership by reducing greenhouse gas emissions and pollution.

Participants felt that national Antarctic programmes were better placed to address local conservation challenges, such as invasive alien species, habitat alteration and activity impacts and pollution from local sources (including fuel handling, waste management and repair and remediation activities). In some cases, the risks presented by these challenges could be reduced by (a) the identification and dissemination of existing best practice, (b) the full implementation of existing regulations and guidelines, and (c) enhanced education of national Antarctic programme personnel visiting Antarctica.

Participants emphasised that Treaty Parties need targeted research, monitoring and evidence to support their conservation decision‐making. Implementing solutions to some current and potential conservation challenges (such as sustainable marine resource use, commercial activities, hydrocarbon exploration, mineral extraction, biological prospecting and geo‐engineering) was linked closely with the process of decision‐making, for which a strong Antarctic Treaty System was essential. An Antarctic Conservation Strategy could help support a strong Antarctic Treaty System by collating evidence and research to support decision‐making.

It was recognised generally that SCAR and COMNAP are well‐placed to work together to enhance conservation in Antarctica and, in particular, through the development of the Antarctic Conservation Strategy. Areas of further work are identified in Appendices to this report.