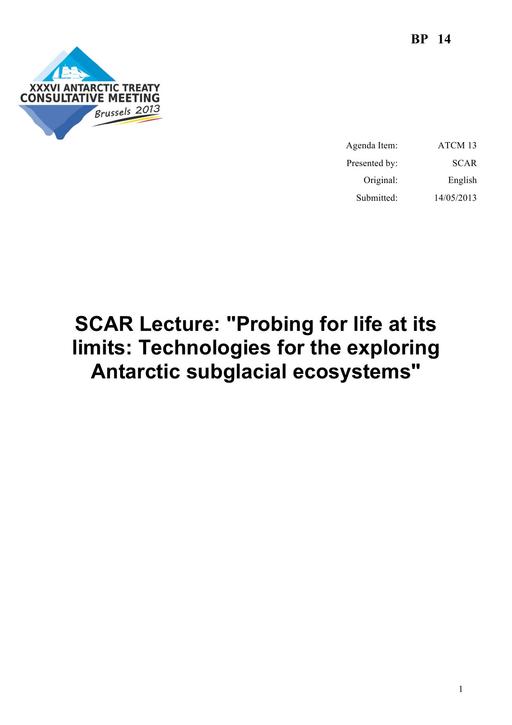 SCAR Lecture: "Probing for life at its limits: Technologies for the exploring Antarctic subglacial ecosystems"

Author: Professor Jemma Wadham is a low temperature biogeochemist at Bristol Glaciology Centre, School of Geographical Sciences, the University of Bristol, UK. She is co-chair of the SCAR ATHENA Expert Group (Advancing TecHnologies and ENvironmental stewardship in Antarctica).

Presenter and co-Author: Professor Mahlon “Chuck” Kennicutt II is a chemical oceanographer in the Department of Oceanography at Texas A&M University, College Station, Texas, U.S.A. He is Past President of SCAR and was Secretary of the SCAR Subglacial Antarctic Lake Environments (SALE) Scientific Research Program.

Antarctic Subglacial Aquatic Environments (SAEs) are recognized as central to many processes that have shaped the polar ice sheets both today and in the past. They include a range of features that differ in geologic setting, age, evolutionary history, hydrological conditions and size, and include subglacial lakes, ponds, swamps, intermittently flowing rivers and thick sediments. These environments are “natural” earth-bound macrocosms, which in some instances trace their origins to a time before Antarctica became encased in ice. Antarctic SAEs remain the least explored sector of the cold biosphere, yet are now known to be viable habitats for microbial life despite the harsh environmental conditions. Within these sub-surface aquatic environments microbial life drives chemical weathering, which in turn exports dissolved nutrients and carbon to downstream ecosystems and greenhouse gases to the atmosphere. The full spectrum of sub-ice environments present beneath the Antarctic continent provides an unparalleled opportunity to explore and study one of Earth’s last frontiers and decipher fundamental clues to the planet’s history, climate and biology.

The last 10 years has witnessed a dramatic increase in the profile of Antarctic SAEs and the impetus for their study. This raised profile was linked strongly to the activity of SCAR via SALE, AG-CCER-SAE and ATHENA. It culminated in the funding of four campaigns to access and directly sample SAEs (the Lake Vostok, WISSARD, Lake Ellsworth and BEAMISH programmes). The next phase of Antarctic SAE exploration is very likely to be shaped by the availability of technology for addressing core science goals. This lecture aims first, to identify the science questions driving technology development for the future exploration of subglacial aquatic ecosystems and second, to present the current status of available technologies for sub-Antarctic science.