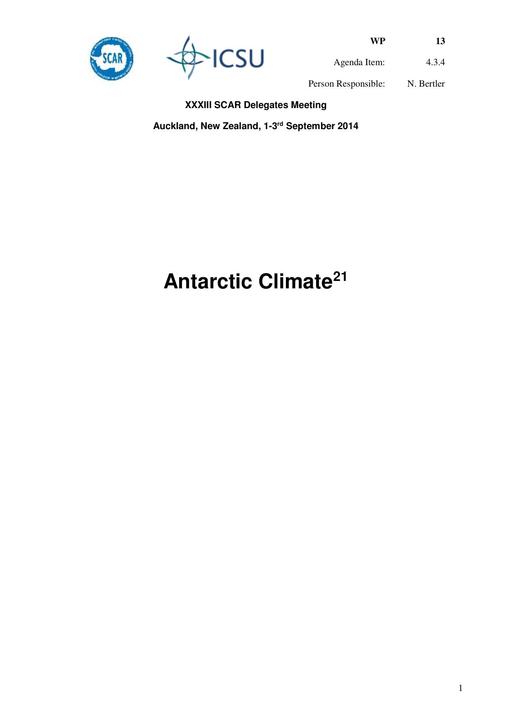 The Antarctic region already experienced substantial changes with impacts on global sea level and ocean carbon uptake. To understand the significance of recent trends in the context of natural variability, we consider changes on a multi-century time scale that are relevant to improve climate projections, the attribution of the causes of environmental change, and the skill of earth system models in the Antarctic / Southern Ocean region. The overall aim of AntarcticClimate21 is to provide improved projections of the magnitude and patterns of change to Antarctica’s physical environment over the next 100+ years.

Important Issues or Factors: The AntarcticClimate21 team has made significant progress in accordance with proposal schedule. Since many of the AntarcticClimate21 team members have been intimately involved in the Antarctic Climate Change and the Environment (ACCE) report, the group already had a successful track record in synthesis efforts and was quick to develop a research strategy and to recruit relevant experts as lead authors, including members of key partner initiatives. The report for objective 1 is well advanced and we anticipate timely submission to the Proceedings of the National Academy of Sciences. In addition, the ground-work for objective 2 is well on the way, with the second workshop coordinated for Dec 2014 (adjacent to the 2014 AGU Fall Meeting) and participants are near finalized (see annex 1). One aspect the AntarcticClimate21 team seeks to improve is our profile and public outreach. The AntarcticClimate21 webpage and facebook page are high priorities to be developed further.

Recommendations/Actions and Justification: We request the SSGs and SCAR Delegates to approve continued support for AntarcticClimate21. The outcome of this SCAR initiative will provide important leadership to improve modeling capability for future projections in time for inclusion in the IPCC AR6, it seeks multidisciplinary collaboration between existing SCAR initiatives, encourages new international research efforts, engages proactively in the development of the new generation of CMIP6 experiments, and promotes the integrates early and mid career scientists.

Expected Benefits/Outcomes:  The principle aim of AntarcticClimate21 is to provide realistic, data-constrained future projections for the next century and beyond, and to support SCAR’s leadership in Antarctic research and policy advice.

Budget Implications: In addition to the proposed budget, we note the excellent support of SCAR of hosting the SRP webpage.