By Narelle Tagged in SCATS 516 downloads 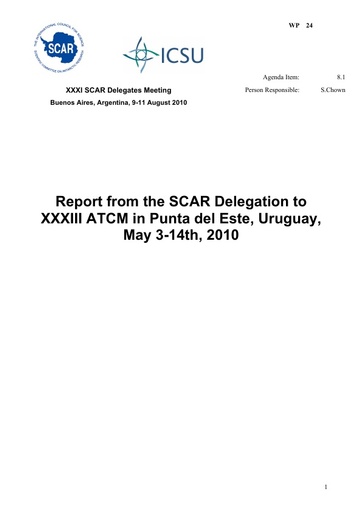 Title: Report from the SCAR Delegation to XXXIII ATCM in Punta del Este, Uruguay, May 3-14th, 2010

Relevant URLs or references to other reports: www.ats.aq

Introduction/ Background: This report summarises the SCAR contribution to the CEP and ATCM meetings held in Uruguay in 2010.

SCAR's contributions to the XXXIII Antarctic Treaty Consultative Meeting (ATCM) were positively received. The Antarctic Climate Change and the Environment (ACCE) report was seen as critical to the success of the Antarctic Treaty Meeting of Experts (ATME) on Climate Change and annual updates on climate change were welcomed as essential for the ongoing deliberations of the Committee for Environmental Protection (CEP) and the ATCM. Many parties were interested in progress with the Southern Ocean Observing System (which was presented both at CEP and at the ATCM). SCAR will provide a final version of the plan for the XXXIV ATCM in Buenos Aires.

The introduction of the non-native species papers were lauded as setting the stage for future directions on this issue by the Parties.  There is a plan to develop a guide of best practices and it wall draw extensively on information provided by SCAR and the IPY Aliens project for directions.

The application of biodiversity data to the bioregionalization efforts by New Zealand was seen as a major development in moving toward a more regularized approach to selection of Antarctic Specially Protected Areas (ASPAs) and conservation in general.  The 2011 SCAR “a review of conservation practice for Antarctica in the 21st century” workshop was seen as an important next step in conservation efforts and participation by Parties was encouraged.

The Parities welcomed the SCAR contribution on bioprospecting. SCAR's survey and literature review revealed the extent of current bioprospecting and the potential for future biotechnology based on Antarctic organisms.

Requests for follow-on work were moderate and SCAR's advisory workload seems to be less demanding than in recent years. This development is welcomed as it allows SCAR to more closely align it work with CEP/ATCM needs and bring a balance between ATCM requests for advice and SCAR initiatives.  SCAR plans to utilize this opportunity to become increasingly proactive in advising the CEP on relevant issues in addition to responding to requests for advice.

Budget Implications: Funds are budgeted so the SCAR Delegation can attend the CEP/ATCM meetings. SCAR’s work with the Antarctic Treaty System has also to be funded through SC-ATS.