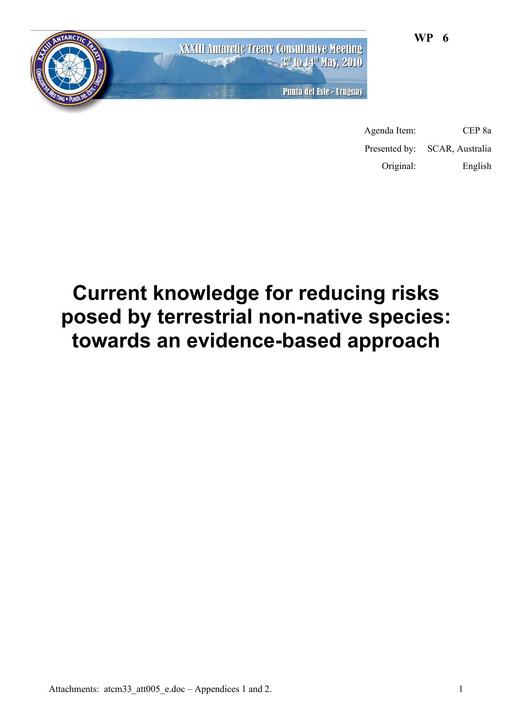 Non-indigenous species (NIS) are considered one of the most significant conservation challenges for the Antarctic, and have been discussed in a wide variety of papers to the Treaty. Three major classes of challenge posed by NIS for the region may be recognized:

The vectors and pathways for the entry of extraregional introductions to the Antarctic, and the higher taxa most likely to be transported are being increasingly well documented. Thus, risk assessments for extraregional introductions to the Antarctic based on vectors, pathways and propagule pressure can now readily be undertaken, and methods to do so exist. Clear goals for eradication have also been discussed. Although knowledge of vectors, pathways and taxa is not well developed for microorganisms and micro-invertebrates (tardigrades, nematodes), this situation is not unique to the Antarctic.

Less attention has been given to the requirements for reducing the risks of extralimital introductions and genetic homogenization, even though these risks have been recognized explicitly for the region. The risks associated with these two processes may be higher than those for extraregional introductions because the physiological barriers to establishment for individuals of Antarctic species in another Antarctic site are likely to be much lower than those for individuals of most species from outside the region.

In this paper, the prospects for and complexities of risk assessments are reviewed. Information on vectors and pathways will be provided by IPY Aliens in Antarctica project and are available elsewhere. The primary objective is to provide an overview of how further to consider the risks associated with NIS, in keeping with global conservation best practise and the developing framework for such management in the region.