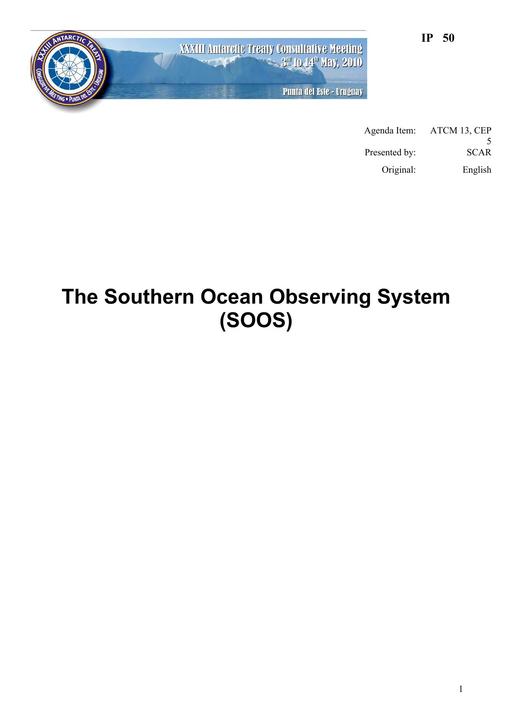 The development of a Southern Ocean Observing System (SOOS) meets the initial requirements of ATCM Resolution 3 (2007), which welcomed and supported “the proposal by SCAR to establish a multi-disciplinary pan-Antarctic observing system, which will, in collaboration with others, coordinate long-term monitoring and sustained observation in the Antarctic”. It is one of the key recommendations from the Antarctic Climate Change and the Environment Report (Turner et al., 2009) and is also a significant legacy of the recent International Polar Year. The design of a SOOS was led by a partnership of organisations: SCAR, the Scientific Committee on Oceanic Research (SCOR), The Census of Antarctic Marine Life (CAML), the Global Ocean Observing System (GOOS), the World Climate Research Programme (WCRP) and the Partnership for Observations of the Global Ocean (POGO). Other groups such as IAATO and COMNAP have provided significant feedback. The US NOAA programme also provided funds for holding SOOS workshops to further the SOOS design plan. This paper provides a vision and scope for SOOS and outlines the proposed structure of the observing system.